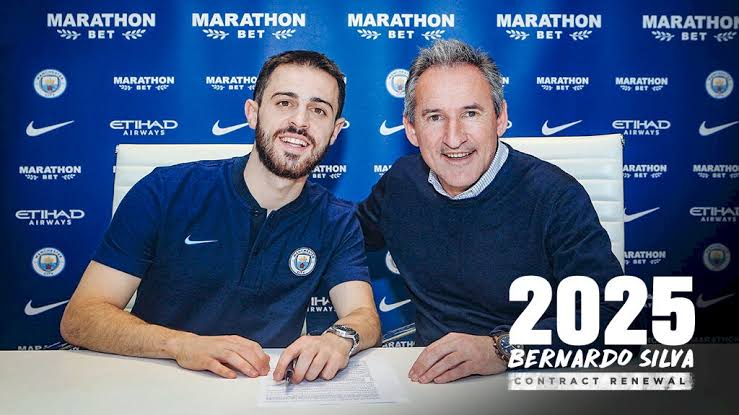 The Portugal international, Bernardo Silva has penned down new contract extension until 2025 with Manchester City.

Two years back, a young talent of Monaco was scouted by Manchester City in and until the semi-final of UEFA Champions League. Bernardo Silva and Mbappe were the constructors of many games for Monaco and the former was then signed by Manchester City for a heavy sum of £43.2 million while the latter being loaned to PSG.

The 24-year-old already had his contract with City until June 2022, yet decided to renew his contract and extend the same until 2025 which purely exhibits his love for the club.

“It’s an honour to extend my deal with Manchester City,” Bernardo said. “This club offers everything a player needs to fulfil their ambitions and there’s nowhere else I want to be.”

“As soon as I heard City wanted me to stay longer, my mind was made up. I love the club, the manager, the players and the fans.”

“The style of football we play here excites me, and I am determined to win more trophies. City gives me the best chance of doing that.”

The Portuguese has already done wonders in Kevin De Bruyne’s absence and has been constructive in almost every game. A journey of fulsome praise it has been for the youngster where his tireless performances for the team has helped them maintain a form parallel to that of last year.

“Bernardo is an exceptional talent, so offering him a new deal and ensuring he spends the best years of his career with us was a very easy decision,” said City’s director of football Txiki Begiristain.

“This is the latest example of our commitment to building a young squad of world-class players.

“We are constructing a side that will provide a platform for sustained success. Bernardo fits neatly into our plan.”

After Kevin De Bruyne, Raheem Sterling, Ederson Moares, Sergio Aguero, Aymeric Laporte and Gabriel Jesus, Bernardo is the seventh City player to have penned a contract extension under Guardiola which speaks volume about the affinity the players have towards this Spanish boss.