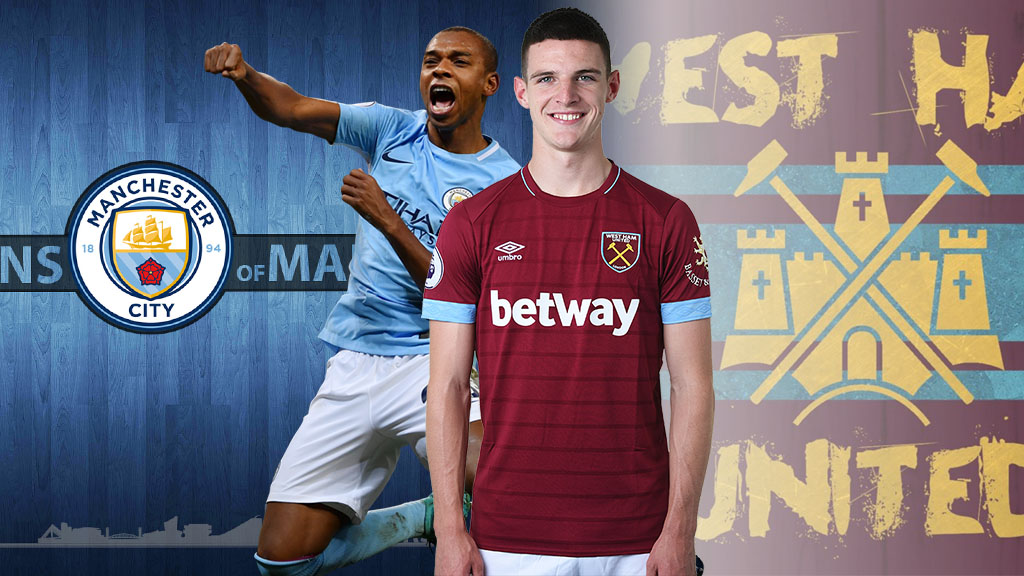 The Brazilian midfielder Fernandinho has reached his peak both in age and form. Although the defensive midfielder is ageing like wine : becoming finer with age, it will be no long that he will have to bid goodbye to Manchester City and football. Already 33 and about to age 34 on May this year, Manchester City do realize the need of a replacement, not an ideal one.

Manchester City are assumed to be lining up a deal for the West Ham midfielder and a young gun, Declan Rice who has caught the eyes of Manchester City Boss Pep Guardiola. The starlet of West Ham plays under former City manager Manuel Pellegrini and is assumed best to replace the standout performer of City from 2013, Fernandinho.

The 19-year-old had recently signed a 5-year contract with West Ham, last month and if Manchester City want to transform their wish a reality, the Sky Blues will have to pay a fees more and around £50 million. A fee tag that could find Fernandinho’s replacement. Pep Guardiola has shown interest in the youngster because of the similarities he sees in Fernandinho and Rice.

If City really fancy Rice as a replacement they should sign him by this season m, so that the youngster can play alongside Brazilian and learn the mantle. This would allow the youngster learn and possess the skill that City’s heart in midfield possesses.

If Rice, really is taken in as Fernandinho’s replacement, he will have to shoulder a lot of positions. Like Fernandinho, Rice will have to running all along the ground, right and left through the flanks, build up games and hold on possession.

City have been vulnerable without Fernandinho and if Guardiola wants to keep his side intact even after Fernandinho’s exit from football, he will have to find his replacement and who better than Declan Rice, a young and interesting prospect with years of football to come.

WATCH: DECLAN RICE ON ASPIRING TO PLAY LIKE FERNANDINHO AND IMPROVING AS A MIDFIELDER | EXCLUSIVE INTERVIEW