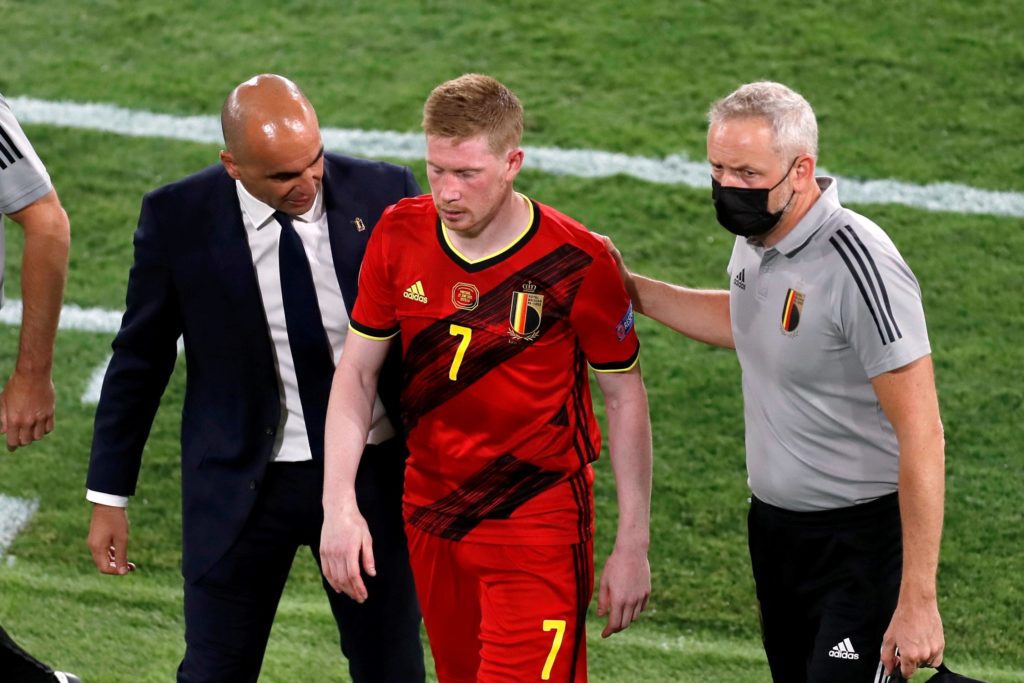 Kevin De Bruyne suffered yet another ankle injury after a challenge from Portuguese player, Palhinha. A scan is scheduled for Tuesday in order for the swelling of the ankle to subside.

Manager Roberto Martinez indicated that it doesn’t seem like a serious injury but De Bruyne will most likely not be available for the Red Devils’ crunch tie with the Azurri in Munich later this week.

“It’s quite positive for us. Eden and Kevin have no structural damage,” the Belgian boss confirmed.“They will remain with the squad. We won’t get them fully fit for Friday. In the next phase they will be fit to play. We take it day by day.”

Kevin De Bruyne and Eden Hazard are OUT of Belgium’s quarterfinal against Italy—but manager Roberto Martinez says both could return if Belgium progress 🇧🇪 pic.twitter.com/6makcrofQr

The Manchester City star has struggled with ankle injuries since last season, spending a substantial amount of time on the sidelines. Despite his injury woes, the former Chelsea man has managed to produce masterclass performances in many games and flashes of his brilliance have been seen at Euro 2020.

De Bruyne has served as the creative mind in the Belgian midfield and continued to impress against the Portuguese, before suffering the unfortunate injury. His ankle injury at the Euros doesn’t look serious and should the Belgians qualify, he is in line to feature in the semi-final tie.

He becomes the third Belgian player to suffer an injury, after goalkeeper Simon Mignolet suffered a knee injury that rules him out of the tournament and captain, Eden Hazard who was also substituted late on against Portugal, with a hamstring injury that is feared serious among those in the Belgium camp.

The Belgians might very well have to do without their star midfielder against a very well-drilled and disciplined Italian side on a 31 game unbeaten run.