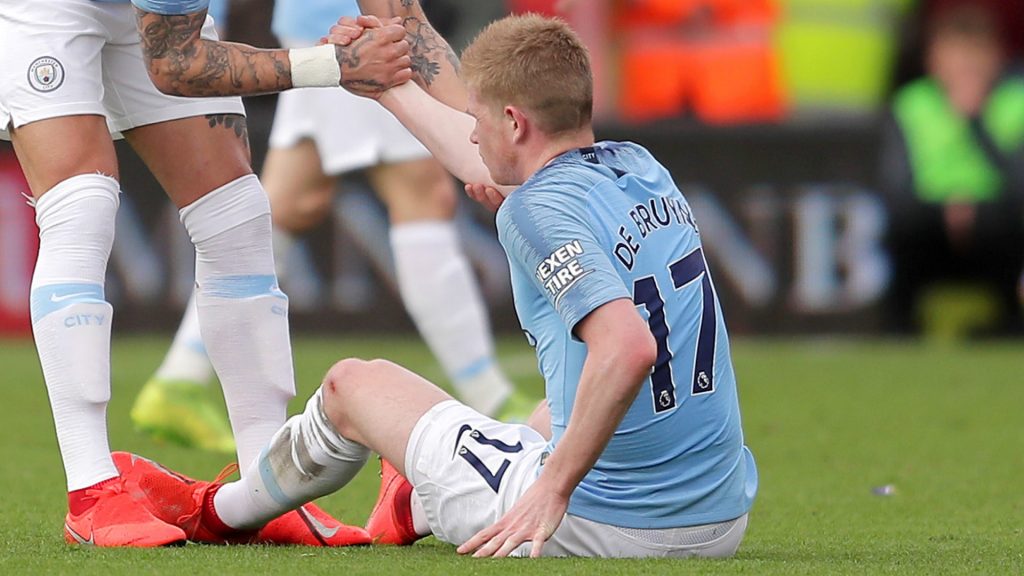 The busy schedule of Manchester City has take a toll on a third of it’s players, Kevin De Bruyne being the latest after the exit of Fernandinho and Aymeric Laporte until April.

Pep Guardiola & Co. have added another ace to their injury vows in Kevin De Bruyne against Bournemouth as the Belgian international was subbed off just before the half-time stroke. It looks like hamstring injury on the first look.

The Belgian international who had recently arrived from spell of punctuated knee injuries, former in August followed by a comeback injury in November. The player has never got into form this season, unlike the last one where he scored 12 goals and assisted in 21 , pertaining to his injuries.

Kevin De Bruyne was substituted by Riyad Mahrez in towards the end of first half after the midfielder had pulled off his muscles after passing the ball forward. To suffer an unchallenged injury in a match that was wholly and solely dominated by the Blues of Manchester, the blow is more severe.

Asked about De Bruyne’s early exit, Guardiola said: “I think Kevin has a little bit of a muscular problem. But when you play 25 games in 93 days, it is a physical issue. We don’t give the players time to recover.”

Manchester City did not allow the hosts to dominate in their own field, demolishing their defence a plentiful times but only being successful in scoring once. Bournemouth, on the other hand, had no shots on goal, leave the thought of having a shot on target.

Following Kevin De Bruyne’s injury, John Stones was also substituted in the opening minutes of second half by Vincent Kompany and he also seems to miss the upcoming games adding his name to the unwanted list of injured players, namely Fernandinho, Laporte, Kevin De Bruyne and Fabian Delph.