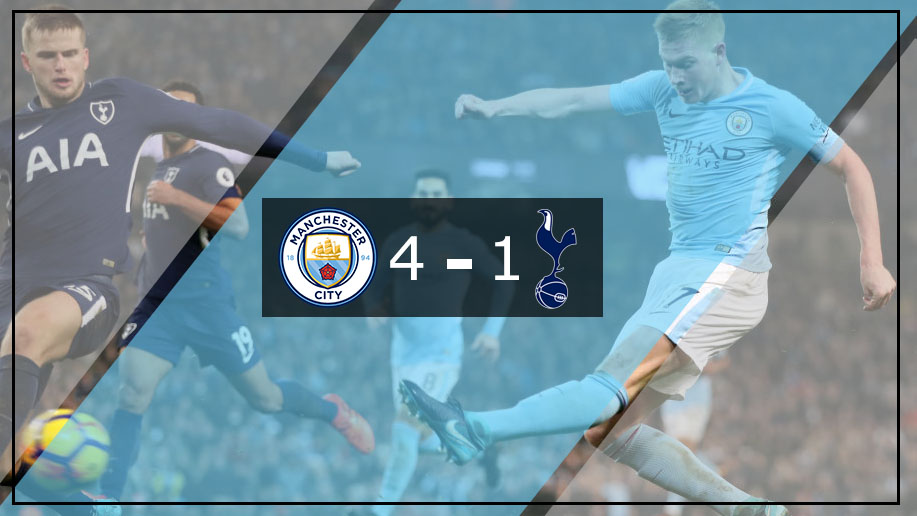 Two goals from Raheem Sterling and one each from Ilkay Gundogan and Kevin De Bruyne was enough to see off Spurs in one of the outstanding performances the Citizens have prescribed for this season.

Guardiola City created history in the midweek as soon as they defeated Swansea by winning 15th consecutive games (more than any other club’s winning streak) and there was no difference whatsoever they would not do so against Tottenham in the Etihad stadium. There was no change for City’s success story as they march on now 52 points on board with just eighteen games played.

Mauricio Pochettino’s Spurs recently picked up some good victories after their six games match unbeaten run and were poised to bring out a shocker on Thursday. They began it brightly though. City felt the contamination of short and flowing passes plan of the away side but at last had so much quality to laugh it the last.

Before the game, it was reported that David Silva will miss the fixture because of some personal matters presumed that Silva will become father soon. Anyway, Ilkay Gundogan was permitted instead of him and he didn’t let his boss down by scoring the opener in the 25th minute.

City won a corner through Leroy Sane artistic work and from the resulting set piece driven by the same man who won it gave Gundogan acres of space to stay and nod the ball into Hugo Lloris’s net in his first start of the campaign. Unacceptably, Spurs didn’t knew much about it. 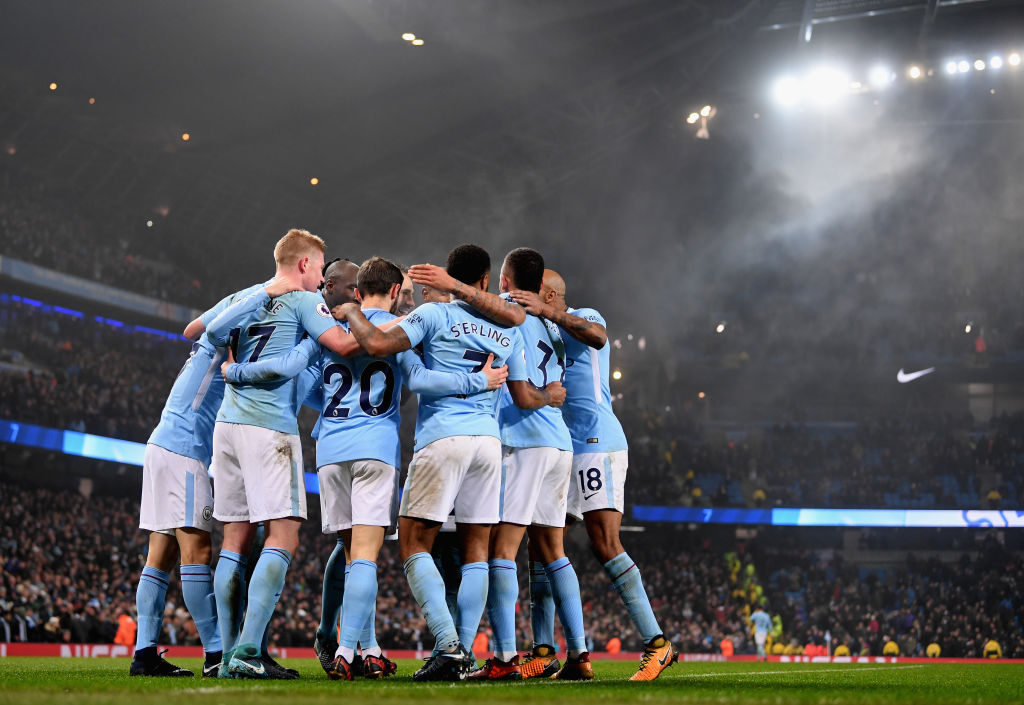 With the German star scoring after October 2016, there was no stopping for City to repeat their unearthly brilliance. Spurs meanwhile tried to create some real chances but everything ended for the partnership between Otamendi and Mangala.

Dele Alli and his compatriot tried hard to frustrate the Belgian powerhouse Kevin De Bruyne by going for brutal tackles and narrowing the corridor for him to run on. But one of the best player in the campaign so far will not leave his calibre like this. That was certain when he hammered home a low drive giving City a comfortable 2-0 lead in the second half.

Once Guardiola’s men got that, there was no stopping. Three minutes after the second, Gabriel Jesus wished for more and took the responsibility from the spot but he hit the post and in the rebound Sterling forgot to keep it low down in the empty net instead lashes a wild strike.

Chances fell to either sides but it was looking that City are prime dominators for everything.

Raheem Sterling next engaged himself in the goal scoring usuals. Gem of a pass from Kevin De Bruyne found Sane closing on to the goal. Instead of shooting himself, Sane put into square and Sterling would not had any easy chance like this to repay his older mistakes.

The English international wrapped up the victory in dying seconds when Eric Died casually took a clearance and Sterling buried the last one past Lloris legs.

Pep Guardiola :“How we worked without the ball. Both teams wanted to press high. We had to adapt as we didn’t want one less player in the middle. We made an outstanding performance, we scored four, we created lots of chances against a strong team.”

“I am proud. I don’t want to be humble right now I am proud with my staff. We have achieved it with three teams. We work a lot and the players know that.”

“I want to say thank you to all my players and especially Kevin. He is an example for the young players. They know how good Kevin de Bruyne is. When they see him play, that is the best example. He is helping us be a better club, an institution for the future. His performance today … i have no words.”

De Bruyne :“We are here to win titles. We had a great start, it’s still more than half (of the season to go) so it’s still very difficult – we want to win every game and everybody who comes in is doing an incredible job.”

Gundogan : “It was an incredible performance. We are happy to beat a team like Tottenham. I was a bit surprised that I was free (for his goal from a corner), I guess the Spurs players didn’t know I am strong at that. I have been through tough times so especially games like today where you are able to improve your self confidence are very important. Today was a good day.”