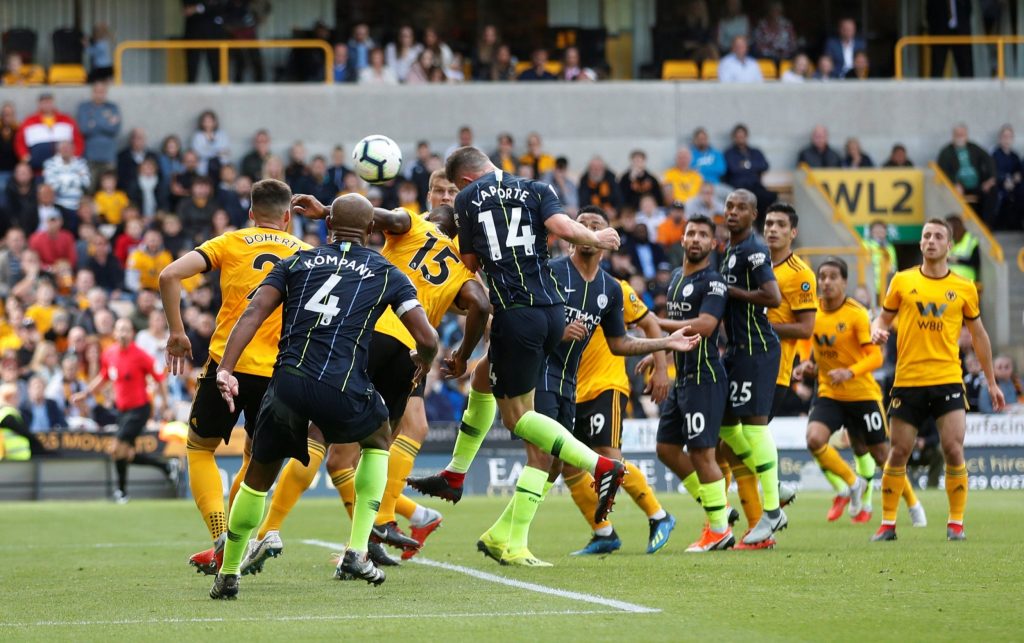 Guardiola: “Our physical condition is good knowing the part of the season we are in – not too many training sessions. It’s not the most important thing in football – there are many other things, but of course we need more time.”

On Mendy: “He brings physicality, his quality at the front and back. Now he plays a lot because we play one game a week…when we start playing three times a week everyone will play.”

We start the game with some silky touches by visitors but the halo was soon handed over to the hosts as the match progressed. Wolves were neat on the passes and there was sort of perfection in the way they moved the ball around. 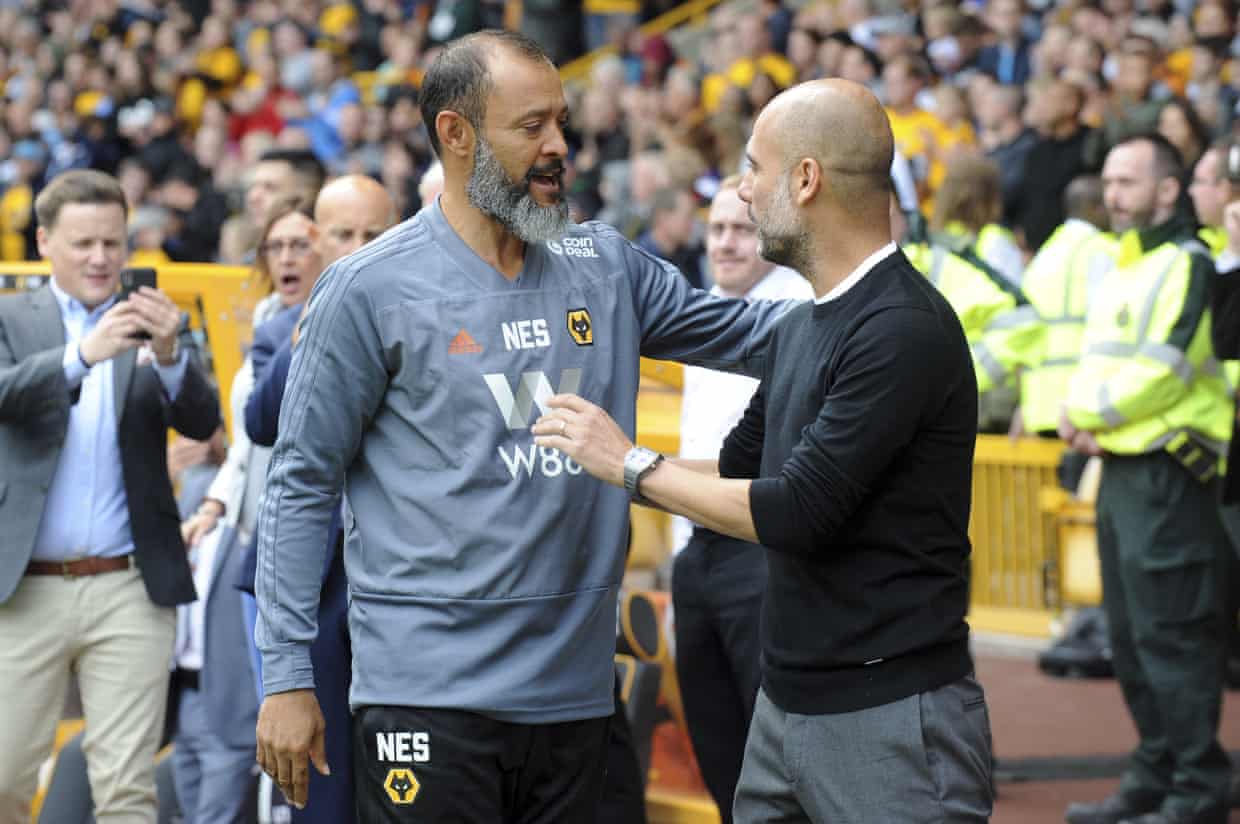 Manchester City are playing with a 4-3-3 formation but things soon shift to two strikers upfront in Sergio Aguero and Raheem Sterling cutting inside with Benjamin Mendy playing well ahead (almost as a winger) on the attacks. But the attack is to be held to a stop as winning the momentum from the men in Yellow/Orange is a priority for the men in Blue.

City’s skipper Vincent Kompany found himself into Referee’s books into the first quarter of the fixture when he crashes into Ruben Neves from behind with the Portuguese spinning on a clever turn.

Wolves fans are certainly enjoying what is on the display with the confident stuffs from their representatives. Manager Nuno Espirito Santo already discussing with the official on the sidelines about couple of ruff fouls from Vincent Kompany and Fernandinho.

In the twentieth minute, Vincent Kompany loses the position in the opposite half and Raul Jiminez got the ball inside the net only the goal to be disallowed on a close off-side call.

Wolves certainly occupied their place inside Shark heads as you could soon see the Citizens misplacing the passes and failing to keep confident possession for a comfortable period of time. 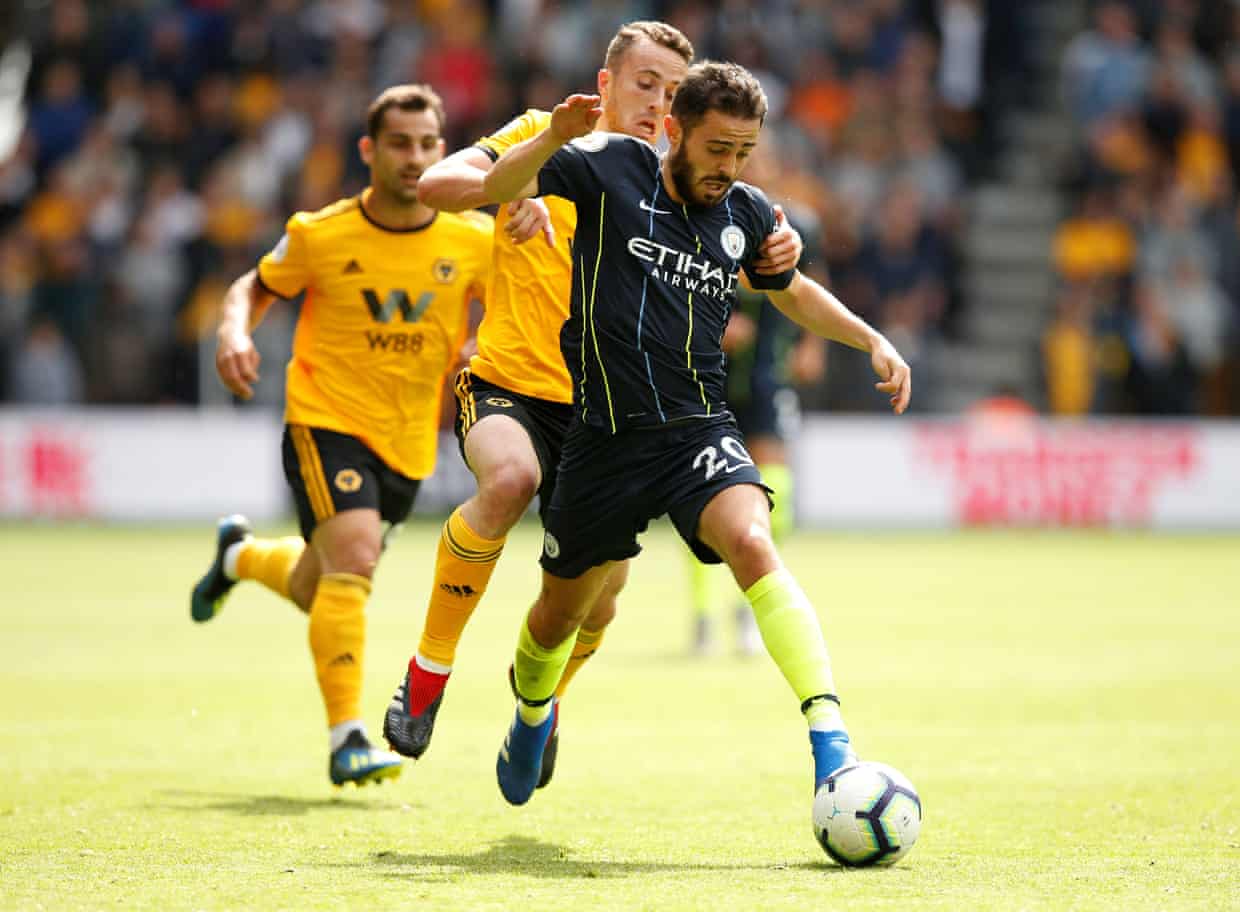 That doesn’t mean City did not get their chances, they did have fare share of their chances. Sergio Aguero got an unlucky deflection from the woodwork, yes, Patricio was beaten but everyday is not a Sunday buddy.

Rui Patricio is one of the folks who had their contract terminated at Sporting, he has 74 caps for Portugal and he seems to improve every-time you watch him. Raheem Sterling curled in the shot targeting top-right corner with only Patricio dragging himself to keep the ball out. If not the best, this will certainly go into one of the best saves at the end of the season.

After the fantastic first half, the host has given visitors plenty to think about. Wolves started the second half faster, and just over 10 minutes Nuno’s side manage to break the deadlock from the resulting corner. Ederson denied Costa’s shot and was able to put his shot behind.

From the resulting corner, Moutinho curls a stunning ball to the far post. Willy Boly managed to direct it past Ederson into the City net, though replays showed that he in fact handled it in. Controversy but the goal stands. 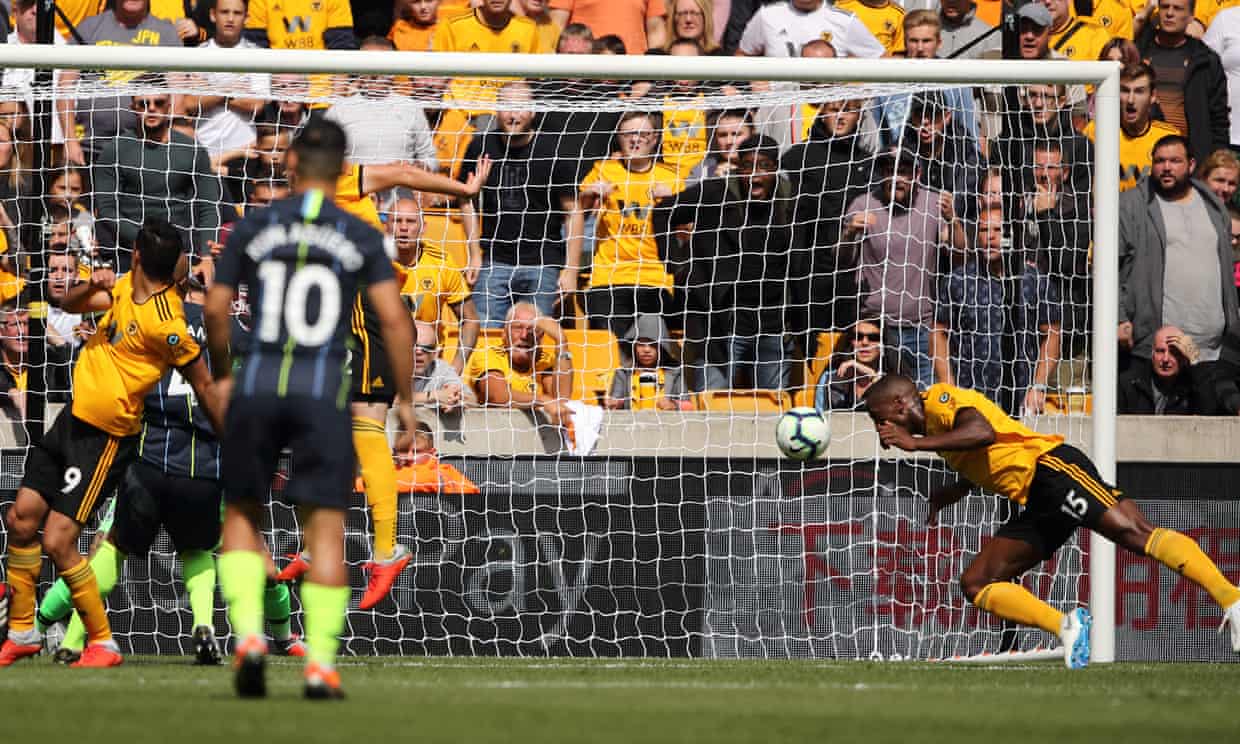 Manchester City were back into the game just over 10 minutes though, as Laporte headed home an Ilkay Gundogan free-kick in 69th minute.

It was a relief as it felt as this may be one of those days when nothing went in and with 20 minutes or so remaining, there was time to go on and find a winner.

City are furious once again and threatened to take all three points, as few minutes later Mendy’s cross was met with power by sub Gabriel Jesus, but Rui Patricio made another fine save.

Leroy Sane was thrown on in the latter stages replacing Gundogan, as both sides look dangerous pushing forward and have the capability to find a winning goal. 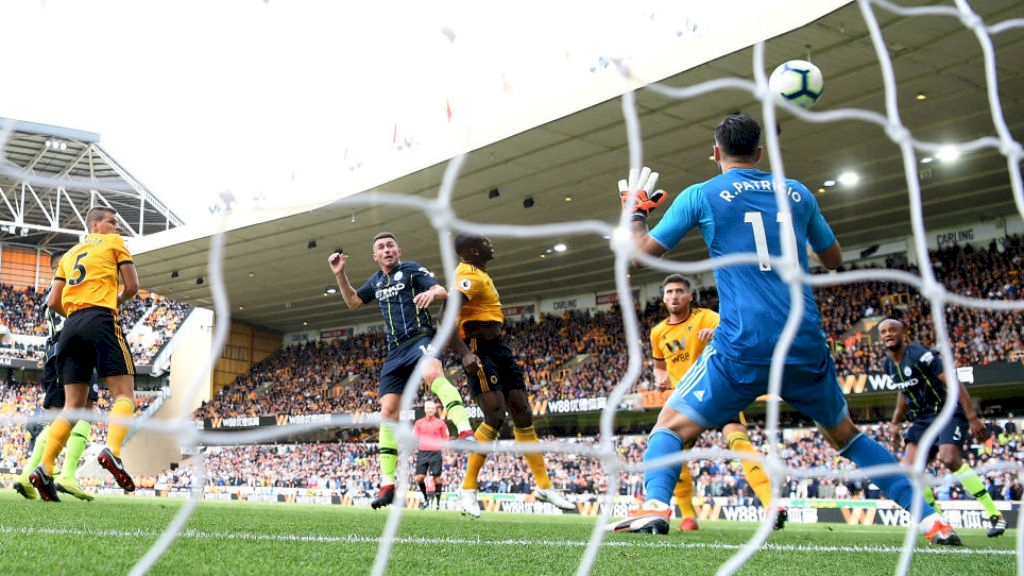 The Host went mightily close to a winner through Jota in the dying moments as he fizzed a shot a foot or so over the crossbar. In the last minute of stoppage time Aguero was felled just over 25 yards, his free-kick struck the woodwork with virtually the last kick of the game.

Kyle Walker: “We created a lot of chances to put more than one past them, but they are a well organised team and it’s going to be very difficult for teams to come here.”

“With five at the back it’s always going to be difficult to break people down. They’ve got people in key areas where we want to get… but Raz has hit the crossbar, Sergio’s hit the post and then the crossbar at the end so we’ve had enough chances. We need to be a little bit more ruthless and also as defenders we need to take responsibility on the second phase of free-kicks.”

On Wolves goal: “I’ve heard that (it went in off the hand) but it’s hard for the referees to see everything, it was a goal that was given and we just had to get the equaliser which we did and we could have nicked it at the end.”

Nuno: “All the credit is for my players, the way they worked. We knew it was going to be tough, but we played in the shape and style we believed. The players supported each other, it was a very good game. We want to create an identity, you just have to go, no matter who you have in front of you. Recognise the strengths, take advantage of the weaknesses, and prepare yourself to compete.

“We did very well with the ball, with the amount of chances we created against Manchester City. But the result is not what we want. We want to win! Stay humble, stay humble. It’s just one point!”

Pep Guardiola: “It was a good game. We conceded too many counter attacks. But we created a lot of chances. That is a good point. I compliment Wolves. It is difficult against a good team. We tried, we will improve, because defensively we were not solid. Every game we play we learn for the next one.”

Guardiola was also asked whether he thought VAR should be introduced to the Premier League. “It is none of my business.” And was he complaining about the Wolves goal when he had a word with referee Martin Atkinson at the full-time whistle? “No. I was complimenting him on his game.”