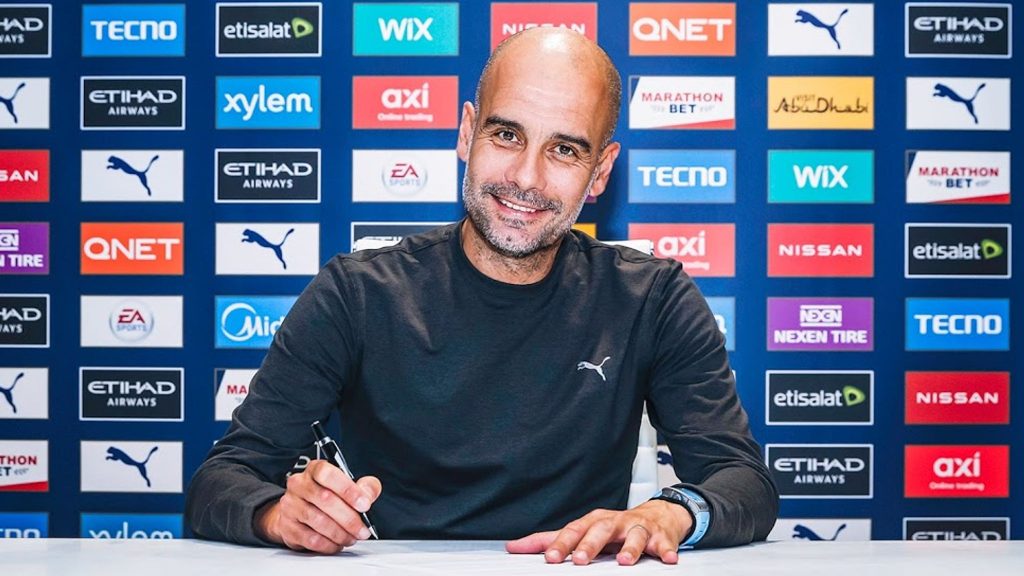 Manchester City today confirmed that they had offered their current manager Pep Guardiola a two-year contract extension to his current contract with the club. Guardiola had joined the club back in 2016, and now extends his commitment with the club until 2023.

The Spaniard had just seven months left on his current deal with the club, and had so far refused to comment on his future with the club, stating that he was waiting to see if he “deserved” a new deal.

Manchester City have turned into one of Europe’s most lethal sides under Pep, who has made some excellent signings over the years after backing from the owners to put together a fantastic squad.

Since replacing their previous manager Manuel Pellegrini in 2016, Guardiola has led the club to six major trophies, winning the league title twice, three League Cups and an FA Cup.

Man City’s chairman Khaldoon Mubarak confirmed the news while talking to the club’s media, “It is testament to the qualities of the man that Pep Guardiola’s passion and intelligent approach are now woven into the very fabric of the football we play and our culture as Club. That impact has been central to our success during his tenure and it is why I am delighted that he shares our view that there is so much more to be achieved both on and off the field.”

“Pep’s contract extension is the natural next step in a journey that has evolved over many years. It is a product of the mutual trust and respect that exists between him and the entire Club.  It also goes to the stability and creativity at the heart of our football operations. Importantly it is a validation of the football structure and philosophy that has been built over more than a decade and to which he has contributed so much.

“I’m sure all City fans share my delight in this new agreement and in anticipating the exciting opportunities that, with continued hard work, are there to be taken.”

Guardiola expressed his delight at extending his contract with the club, “Ever since I arrived at Manchester City I have been made to feel so welcome in the Club and in the city itself- from the players, the staff, the supporters, the people of Manchester and the Chairman and Owner.  Since then we have achieved a great deal together, scored goals, won games and trophies, and we are all very proud of that success.”

“Having that kind of support is the best thing any manager can have. I have everything I could possibly want to do my job well and I am humbled by the confidence the Owner, Chairman, Ferran and Txiki have shown in me to continue for two more years after this season. The challenge for us is to continue improving and evolving, and I am very excited about helping Manchester City do that.”

There is no doubt that the arrival of Guardiola at the club has taken the club to reach new heights, even achieving the domestic quadruple in 2018/19 season, becoming the first English team to attain the milestone. Guardiola will now be aiming to bring to the club Europe’s most elite trophy and win the Champions League, a title that has eluded the club so far.