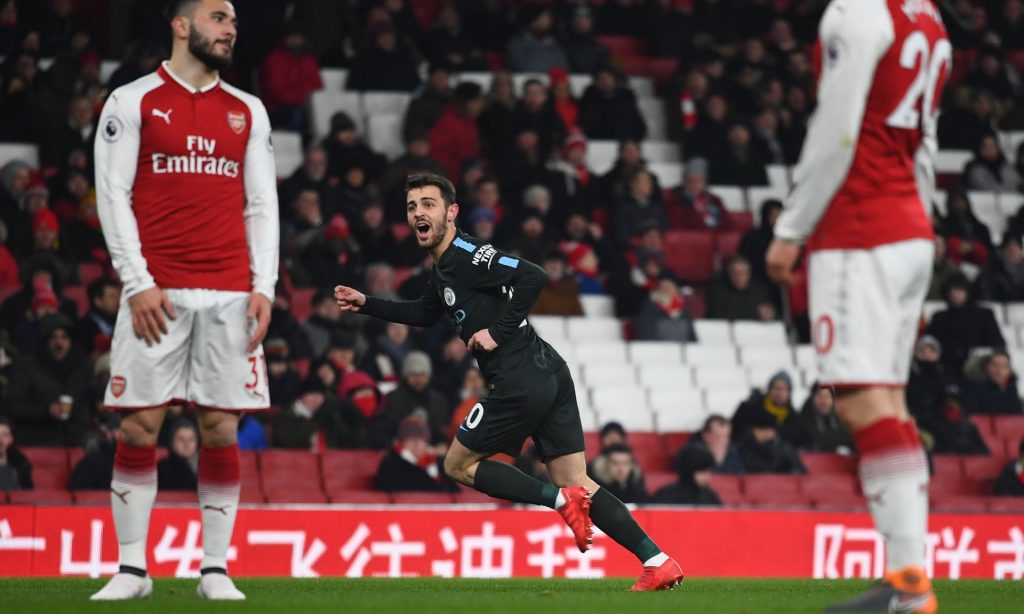 This is how they lined up for Premier League clash

In the first half, The Reds started well in attack. And from nowhere, Manchester City wing back Leroy Sane picks up the ball finding Bernardo and the midfielder curled a delightful effort over Cech and into the corner. Some tops save from Ederson. Well the second one was an absolutely wonderful team goal. Silva feeding Sane, he squaring to Aguero, Aguero laying off to David Silva to smash goal. 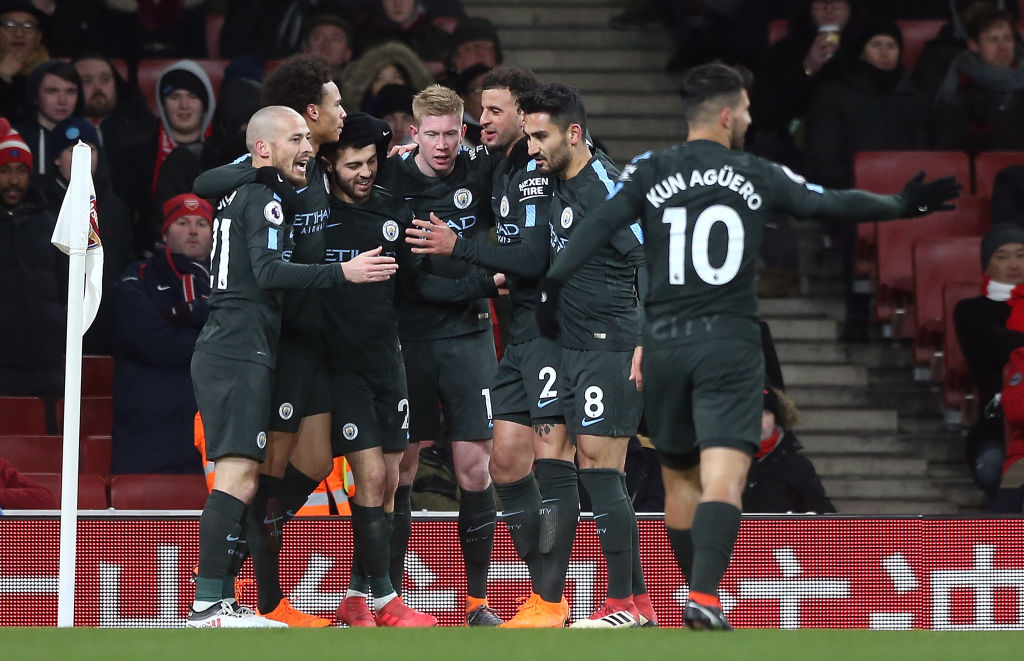 For the first time, Arsenal have conceded three goals in first-half of Premier League home game

In the second half, Good start to the half from the Gunners. Otamendi’s error caught Mkhitaryan in the box – Missed Penalty- Ederson gussed right and palms the ball away from danger. 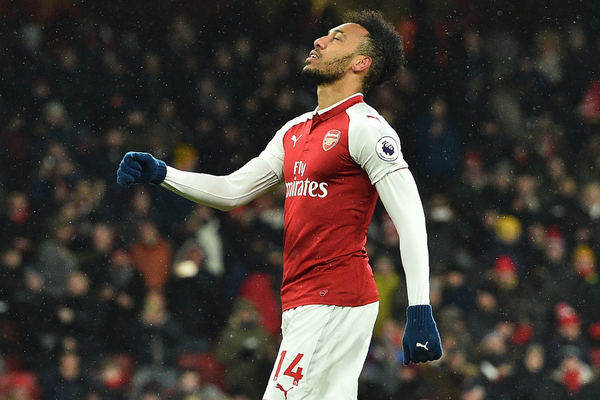 Arsenal are much composed team in the second half. The Blues haven’t done much in the second-half. Chances fell to either sides but it was looking that City are prime dominators for everything – Blocks, well-timed tackles, clearances and perfectly-placed covering players.

11 – Manchester City have saved 11 of the last 19 penalties they have faced in all competitions (excludes penalty shootouts). Intimidating. pic.twitter.com/zF0ZcQeTzc

The score at the half-time remains the score at full-time. A perfect way for Pep to celebrate your 100th match in charge of Manchester City.

The Boys in Blues take a step closer from clinching the title.

Bernardo Silva: “It was a great game for us, especially in the first half. We were very focused and concentrated. We kept playing the way we have been doing and we’re very happy with the three points. We are in first position, 16 points above Man United. We want to try to win the title as fast as we can and try to win every game. Now, we play Chelsea (on Sunday) and we will try to win three points.”

On his goal: “It was a great pass from Leroy – great play from the left. I had the space on my left foot, I cut in and shot. It was a good goal and I am happy for that.” 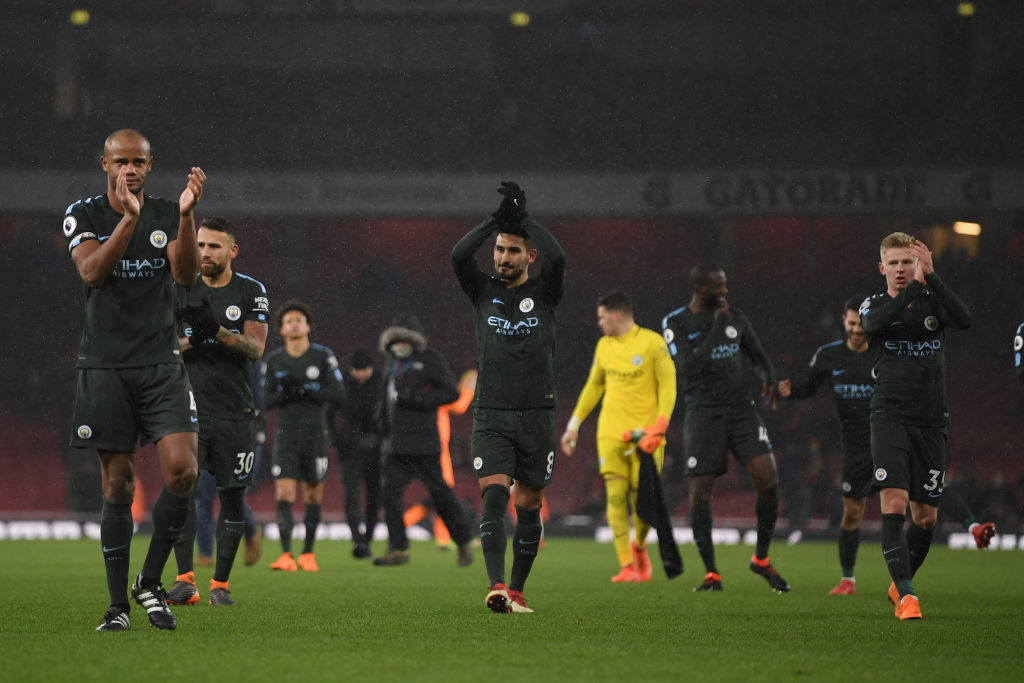 Leroy Sane: “We had a really good first half. We played really well altogether.

“We scored three goals – two counter-attacks. Every one of us played the ball really well at a fast speed.”

On Pep: “He always tries with every player, also with me, to give all 100% what you have, that you don’t rest, and every training session, every game, that you give all the best. I improve so much with him. I think every player in our squad can tell you that. He’s a really good coach and tries always to see where you can improve. He sees mistakes and helps you straight away.”

Pep Guardiola: “It’s so difficult to win two games in a row in four days, against a team like Arsenal. And we did it. The weather conditions were so tough, the pitch as well. The first 15, 20 minutes was not really good, but it was so important today, so, so important. We win, we have another step forward. We need five wins to be champions. The goals were so good, and also Ederson was outstanding, saving the penalty. Arsenal are able to create chances from nothing in 10, 15 minutes. The way we started the second half was poor, really poor, but sometimes it’s not easy to be focused. I can understand. In the end, when we were able to make 15 passes in a row, after that we were able to control the game.

Again, sometimes we create a lot of chances and don’t score a goal. Today, first one Bernardo scored an amazing goal. Three, four chances we scored three goals. We did our job, that is important. We have tough, tough fixtures.”