Normally we see Wayne Rooney and Vincent Kompany go shoulder in shoulder in Manchester Derby. But, On Monday night Rooney has changed vows and will face the Blues with Manchester representing Blues of Merseyside.

And Belgian International is already looking to give fire to the rivalry with English compatriot.

Rooney has been highly effective for Ronald Koeman & Co. and Scored in PL Opening match-day against Stoke City.

“I have a lot of ­respect for Wayne,” he told reporters. “We’ve played so many games against each other.

“I think I’ve played more than 20 times against United in my ­career and not once was he not part of their team.

“Even the goal he scored for Everton at the weekend against Stoke, the way he recognizes that he needs to get in the box, marks him out.

“I don’t think many players could have done that. We can all play the pass he played, maybe even head it like he did too. But to understand that ‘this is the moment I need to go’, to have that timing just like the overhead kick – it’s ­something that sets him apart.” 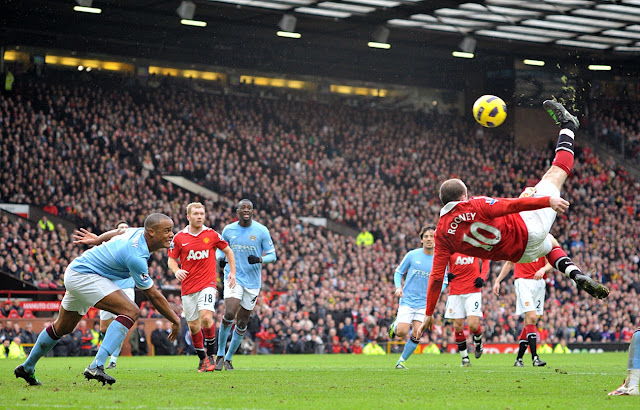 The overhead kick Manchester City skipper refers to is Rooney’s famous and utterly brilliant goal that settled a 2011 Manchester derby in United’s favour – a fact that sill irks the 31-year-old Belgium international.

“I think that goal was kind of a ­testimony to Wayne’s talent because, in that game, I absolutely had him in my pocket! I played a really ­strong game,” he recalled.

“But top strikers do things at unbelievable times and then he pulls the overhead kick and I’m thinking ‘Oh, come on!’.”