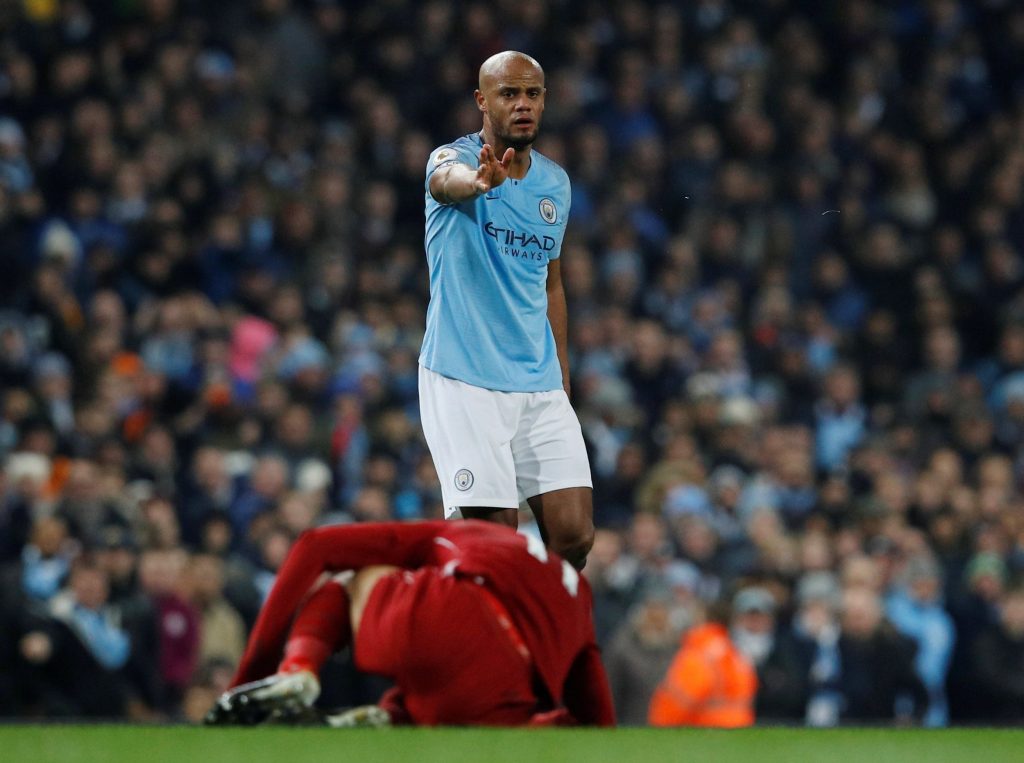 The Blues of Manchester returned to winning ways after thrashing league-toppers Liverpool in a 2-1 nail-biter at Etihad Stadium. Manchester City had to win the encounter in order to press their title charge against the Reds who now stand only 4 points above them. Otherwise, Liverpool would have taken 11 points lead which could have made the title race a mere formality.

The talking point after the game was not City’s enthralling victory over their arch-rivals but an incident which caused a lot of controversial comments after the game. City’s captain Vincent Kompany almost did a Sergio Ramos to Mo Salah which turned out to be the talking point of the game. The highlight of the match was also it’s turning point as City would have drawn the game if it was not for Kompany’s tackle.

The Manchester City captain used all his power in grounding the Egyptian. The incident happened near the centre line of City’s half where if Salah would have gone through Kompany, it would have the goalkeeper to squeeze through and considering Salah’s charisma, it would have been a goal. Vincent Kompany with all his experience knew the fact and had to dive in for the team. But what was more surprising was the fact that he got away with a yellow card ONLY. The tackle which could have kept Egyptian talisman out for months was adjudged not severe by the referee.

While Jurgen Klopp was furious about the decision, Kompany thought it to be appropriate. He said, “I thought it was a great challenge. Was it not? All right,”

“On the pitch I felt I got the ball, a bit of the man, but it wasn’t naughty. I didn’t try to injure him, that’s for sure.”

“It was that or let him go through on goal and the decision was made very quickly in my head.”

Jurgen Klopp was contrasting on the fact that he lost 2 points due to this fault. He said, “I like him (Kompany), he is such a fantastic player but situations like this happen: a player makes a decision, goes on the ground and makes a sliding tackle and takes the risk,” said Klopp, who first spoke about ‘needing blood’ after the treatment Salah received in Saturday’s win over Arsenal.

“If Mo is on his feet – not in the moment when he jumps over him – we talk differently (about the outcome).

A table-turning decision which if given other way around would have gifted a big title chance for the Merseyside club. Nevertheless, Kompany keeps City in the title race.