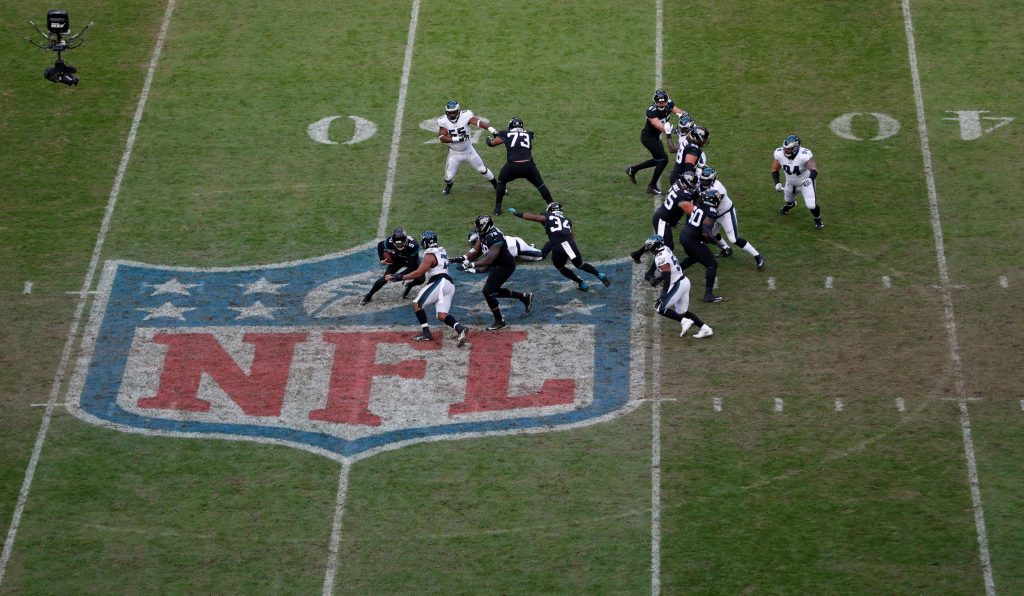 Tottenham Hotspur are set to host Champions Manchester City at the ‘iconic’ Wembley Stadium hours after NFL game at the very same venue.

Wembley hosted NFL International series between Jacksonville Jaguars and Philadelphia Eagles on Sunday, 28 October, Manchester City and Tottenham were scheduled on the same date. But with delays in Tottenham’s new stadium have caused not only postpone in the fixture but also have forced the teams to play on a ‘below-the-standards’ surface.

Though a spokesperson from Wembley told football.london that they are trying hard for the pitch to be as good as they can make in the limited time.

A spokesperson for Wembley told football.london: “We are doing everything we can to help accommodate Tottenham Hotspur’s 2018/19 home fixtures whilst construction of their new stadium continues.

“Maintaining the high standard of Wembley Stadium’s pitch has therefore been more challenging as a consequence.

“However, our excellent ground staff continue to work tirelessly to ensure the pitch is in the best possible condition for all Wembley Stadium events.”

Similar incident happened last year when pitch markings from a rugby league game were clearly visible in the match against Burnley.

A spokesperson for Spurs told football.london : “Spurs and Wembley work together to prepare every Spurs match at Wembley.”

Tottenham manager Mauricio Pochettino discussed the condition of the pitch in the build to the game against Manchester City.

“Maybe it is good for us because we are going to face one of the best teams in Europe and the world in Manchester City and maybe it will help us,” Mauricio Pochettino said.

“It wasn’t a plan for us to play in that period at Wembley and now we cannot complain. Only we need to accept the reality and know that we cannot change that.

“I am sure all the people that are involved in the pitch are going to work so hard to get it in a really good condition. That is my wish and I hope it can happen.

“We hope that the weather will be good and not kill the pitch and we can play in a very good condition.”

Pep Guardiola also expressed his concerns about the condition of the pitch before the match.

“It’s what it is,” Guardiola said, as reported by Manchester Evening News . “I’m pretty sure Tottenham have a good greenkeeper, I’m pretty sure the Premier League don’t like it. Tottenham too.”

Kevin De Bruyne, who recently made his return from long time injury also expressed his concerns about playing on that surface.

“Yes [I have done it before], in a preseason, and it’s not nice,” De Bruyne said, as reported by the Guardian. “It’s going to be difficult. I’m not sure how it’s going to be.

“We hope it will be OK and that we can play like we normally do.”