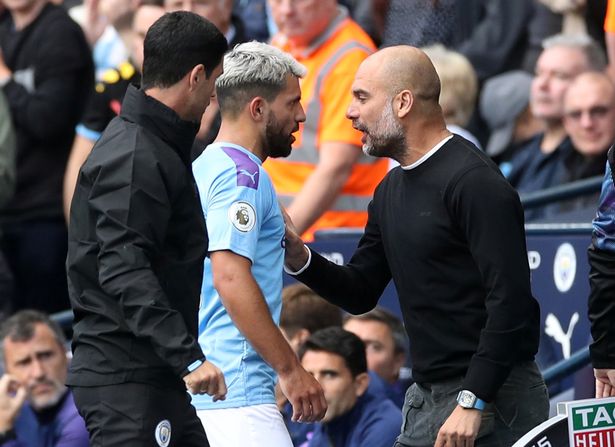 We really have to talk about the unexpected yet animated scene from last night. The touch line aggro between Sergio Aguero and Pep Guardiola has hit a million views already. What was it for? Why were the two love-birds fighting? Did they end up cuddling at night? All questions to be answered.

The quarrel between Aguero and Guardiola took place in the 67th minute of the game when the former was subbed by his coach. Aguero was not upset onbeing called off the pitch but it was Guardiola who spit his views on the striker.

Guardiola was upset with Aguero because of the fact that the Argentine did not pay heed to what the manager was saying when Lucas Moura was brought in as a sub during the same corner when he scored goal. Aguero was nowhere near the penalty box but was waiting to run if the ball was cleared. Not his fault, but should he have listened to what Guardiola was saying, there would have been a goal less for Spurs.

Guardiola was consistently pointing to Aguero to move into the box but the veteran strike did not pay any heed. And at the expense of this, he had to heat up his ears. The Argentine did not take the matter with both hands but replied a furious remark. Aguero was certainly not happy with what his manager had to tell.

The twitter took a toll of humorous remarks over the incident.

The difference beetween Guardiola and Klopp, one manages 11 players when the other manages 11 Mens #MCITOT #Aguero pic.twitter.com/c56Ovm6yWH

Fair to say Sergio Aguero wasn't pleased with Pep Guardiola's decision to take him off. pic.twitter.com/ZhYD9WlS6M

Guardiola, however, confirmed that the heat within both was calmed and things would get back to normal.

“I wanted one on one movement. He thought I was upset with him.

“I am sometimes exaggerated on the touchline but few times am I upset with the players.

“I was a football player, I know what it is like to be in there.Emotion is part of our game. We talked after and during. He’s a guy I love a lot.”