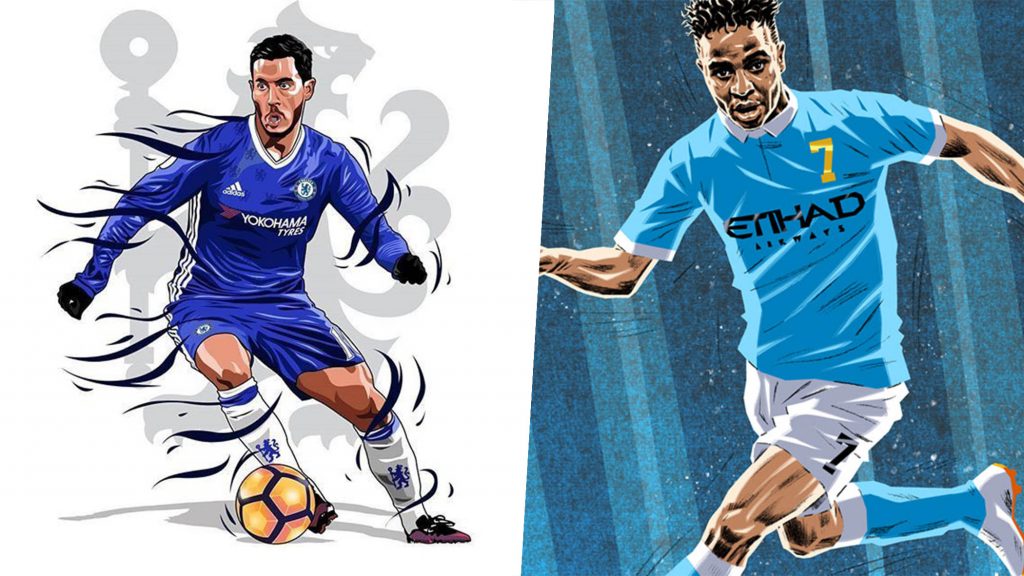 Chelsea is set to face league toppers and potential title holders Manchester City upcoming Saturday. While Chelsea would be looking for a win, City would not want their winning streak to break. Both the teams know their A-player and will bank upon them, heavily.

Eden Hazard and Raheem Sterling have been most influential for their respective clubs. In fact, they have been directly impacting the results, moreover changing it in their favour.

Both the forwards have shown flashes of brilliance from the start and have glimpsed us through things to come.

Of late, particularly this season, Sterling has been nothing but sensational, being Guardiola’s integral recipe for success.

Two of them are equally skilled and gifted; unstoppable so far this season. Both are unique in their approach and there is no way to stop them. While Sterling likes playing in the wings, so does Hazard. They seem on par with each other making it an interesting feat to compare the two.

Eden Hazard has already scored 7 goals in this season and made as many goal scoring chances for his teammates. The Chelsea star plays not only on his abilities but also caters to play on the strength of his teammates, bringing the best out of them.

Irrespective of the team he plays in, be it club or his nation, Hazard has proved time and again that he is pivotal to team’s success. He always baits his records to get other players on score sheet, last goal of Ruben Loftus-Cheek against Fulham beholds the truth.

The Chelsea ace can play in either wings providing ease to his teammates and versatility to his gameplay. Chelsea’s no.10 is surely Sarri’s favourite and will be the one to bank upon.

A consistent throughout Chelsea’s career, Hazard has proved that he is a big game player, and the game against City is no less than a right moment to shine.

With 8 goals and 6 assists already, Raheem Sterling is certainly Premier League’s player involved in most number of goals this season. UNDERRATED? Definitely. Sterling has proved one and all why he is most trusted upon by Guardiola and also England’s most talented wings man in present era.

With all attribute of an attacker, Sterling offers flexibility, pace and creativity which enables the likes of Leroy Sane, Silvas’ and Aguero to keep their name on scoresheet. His ability to wriggle through defenders and withstand their challenges has brought in laurels.

Of the two, Hazard may be termed as better player by many but considering Sterling’s recent form, Chelsea will be the one pondering more on how to stop the Jamaican born rather than Pep Guardiola’s side being tensed over Hazard’s presence.

Both the players have got everything a striker would have, quality, mobility, mental and physical strength as well as intelligence on the field. Who will transcend over other compatriot? The one to out power other will be more than resourceful for their respective teams.