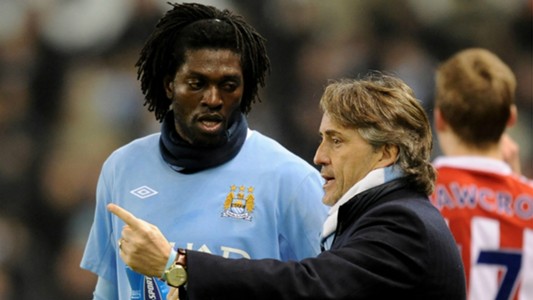 The former Arsenal and Manchester City striker Emmanuel Adebayor hits back at the treatment he received from ex boss Roberto Mancini during his tenure at Manchester.

The Togolese forward made himself one of the fantastic strikers in premier league history mainly with Arsenal but never managed to keep up his form after that. Moving to City, he indulged himself into a conspiracy and now recalls all those I’ll moments he had with the Italian manager.

“The Coach, Roberto Mancini, didn’t have control over the dressing room,” Adebayor recalled in an interview.

Though Mancini gifted the first ever premier league title in the history of the club in 2013, Adebayor is not convinced. He said it is not surely enough to consider him one of the best in his job.

“He annoyed the 25 players. Mancini was a great player, but he’s not a great Coach. So far he’s won what, exactly?

Adebayor also opens up how much exploitation of money Mancini made in the signing of class players instead of looking for youth prospects.

“At every club he goes to, he buys 40 players. When [Jose] Mourinho took over Inter after him he had 40 international players. What are you doing?

“I was there in Manchester and he signed [Edin] Dzeko, [Mario] Balotelli, [Carlos] Tevez, [Sergio] Aguero… five world-class strikers”.

The forward at last reveal all the cause of his intention to speak against the manager.

“If he’d told me I had to leave I’d have done it, but he said ‘I need your football’. I’d play, I’d score, then the next day he’d pull me out: ‘that’s fine, but we’ll play differently against Manchester United…’

“The players were talking among themselves and no-one wanted to play for him, it wasn’t like that with [Didier] Deschamps at Monaco.”