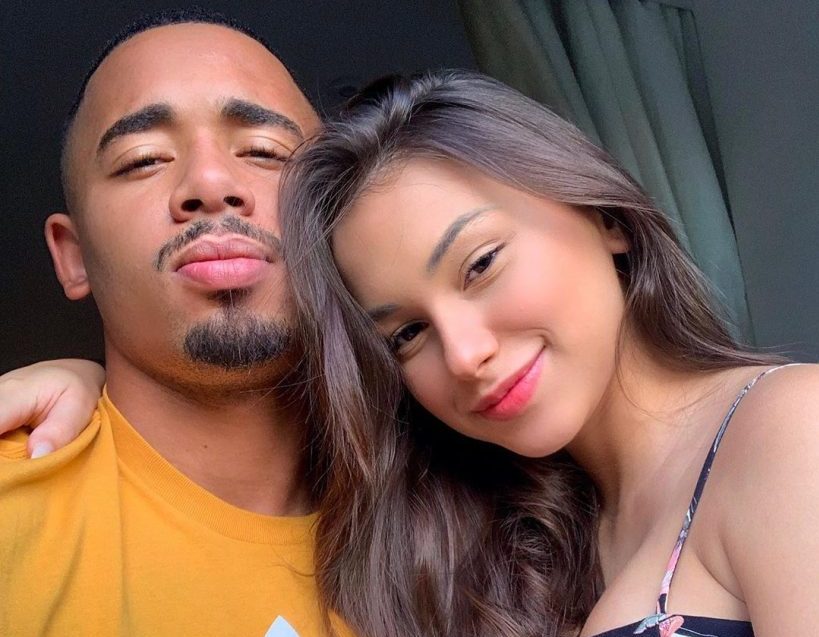 Gabriel Jesus may be 22 right now but is still pampered by his mother. The Manchester City hot-shot was recently spotted with his new girlfriend, which by facts will not be loved by his mother Vera.

Jesus lives with Vera and his elder brother in UK but is on an international duty in Brazil where he has found out time to lurk around with his new Wags. The City forward has stepped on the path of hot coal with the wrath of going public in presence of his strict Mom.

Fernanda Queiroz was seen posing with her boyfriend on Instagram with their tongues out for the camera and a heart emoji next.

Gabriel was already linked with the pop star Ludmilla Oliveira da Silva in the past and were said to be secretly dating each other. Though in an interview in May, pop star dismissed any involvement with Gabriel and said they were pals.

Ludmilla Oliveira da Silva is a singer songwriter and one of Brazil’s top female artists.

The Brazilian just traveled back this Sunday and would have had it hard from Vera considering the comments she had told earlier. The no ‘slogging rule’ of Vera has been broken.

Vera – who calls Gabriel ‘baby’ – said in an interview in Brazil: “Girlfriends have to live by my rules, and there’ll be no heavy kissing. Staying over, only once in a while.

“I will never accept that my son disrespects the daughters of others. No son of mine is going to get someone else’s daughter pregnant. I demand respect because I raised all three of them on my own, with the help of God.”

Vera is a woman warrior and has taken care of his child since forever. The mighty mum takes care of all the amenities involving Gabriel that also includes his six-figure salary.

Gabriel is a mumma’s boy too. Gabriel has a tattoo on his body which reads: “Every step I make, every road I take, every path I choose, your hand will guide me, Vera Lucia.”

The player explained: “The tattoo I had done, I didn’t tell her that I was going to do it, but when I got home, my mother was much calmer when she saw that her name was on it.

“She liked it more than I did, so she didn’t scold me too much.”

The love and camaraderie that son-mother share should not be a problem but who cares, Jesus looks lovely with his new girlfriend and for the fans it’s one more sight to watch.