Last week at UCL draw, Manchester City were drawn in Group F, which gives Blue side of Manchester the opportunity to top their UEFA Champions League group against Shakhtar Donetsk, Napoli and Feyenoord.

The Manchester City Director of Football, Txiki Begiristain believes the transfer made by the City’s Boss during the 2017/18 campaign make his side a stronger proposition.

“We want to be a football Club where we are always there in the quarter-finals, semi-finals and getting to finals,” Manchester City Director of Football said.“We want to be there every year. We want to be consistent in our performance and for that I think we are ready to do it.

“We are improving every season, we are improving the squad. We have refreshed the team and we are hoping that we can remember what we did two years ago when we got to the semi-finals and why not even more?

The former Barcelona player praised the depth of quality in Group F and says he doesn’t expect an easy ride.

“Of course, it is difficult [against Shakhtar Donetsk]. They are always building good teams, they sign good players, so it’s going to be also difficult to go there and beat them.

“And the rest of the group…Napoli is probably for me now the best team playing football in Italy, they are doing unbelievable football. We saw against Nice they did unbelievable, so we have to be careful.

“And always Feyenoord, touch football, they like to play and what they do, they do well. I don’t know whether to say I am happy or nervous. The fact is it’s not going to be easy.” 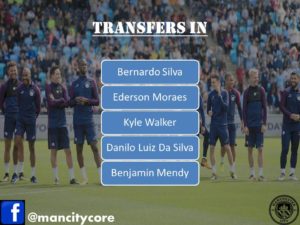 Pep Guardiola will be looking to win big after not so inspiring first season at Etihad Stadium. Building from the base Pep has not left any position unmarked, picking all the necessities from defensive to offensive which have made Manchester City look as one of the best side around the globe. They are not only the Premier League favorite but also one of the big force in the Champions League which are capable to give nightmares to the clubs from Real Madrid to Bayern Munich. There is no doubt that this side have what it takes to kiss the Champions League Trophy.

Speaking about The Dangerous New Manchester Force, lets start with the last line of defence –Ederson Moraes: He is certainly an upgrade to former Catalan goalkeeper Claudio Bravo. Ederson has shown what he is capable of in the pre-season despite not getting a chance to prove himself in the Premier League. But he will certainly be one of the golden gloves in the Champions League this season.

Speaking about defence, Manchester City have added Benjamin Mendy, Danilo and Kyle Walker to their defensive option. They can help block those crosses and provide that physicality in the defensive area. The return of Vincent Kompany  is one of the positive for Guardiola this summer. He is the captain leading from the back and fighting till the end and is regarded as one of the best defenders around the globe. 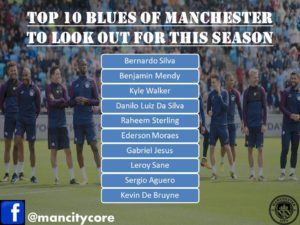 Speaking about Central defence, John Stones have come a long way, he is the wall in the defence and the tower in set peaces. He is still young and growing but there is no doubt that one day he will be the man to watch from the back.  City even have Otamendi who is beyond beatable at his best. Pep Guardiola is not done here with his defence and is looking to bring in one central defender before Thursday’s deadline. Jonny Evans may be on his way to Etihad Stadium and will certainly be one of the key to defense if he completes his move this summer.

Benjamin Mendy, Danilo and Kyle Walker, they are not only in addition in defence but also beasts going forward. their runs and crosses are one of the key ways for that City goal. It looks like City’s Boss will using them as wing-backs who can provide in the front and stay put on the back. All the three of them are one of the best wing-backs in the world and all them in a single team can bolster in defensive as well as in offensive ways.

Lets turn our attention to attacking side, there are big names in the Manchester squad who can attack, new boy Bernardo Silva, David Silva are one of the keys for Blue sides whose performance can decide where the game goes. 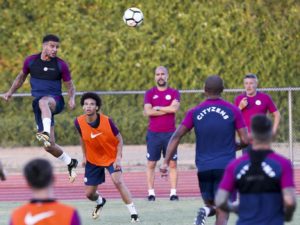 Yaya Toure will be someone who will control the difference between Offence and defence, where as going forward Manchester City look as dangerous as they can be with The pace of Leroy Sane and Raheem Sterling and Passing of Kevin De Bryune. And talking about strikers City got the best available out there Sergio Aguero and Gabriel Jesus.

Sterling is a bit inconsistent with his performances but when that guy is around the box you can expect a goal any time. He has matured a lot since his move from Liverpool and working with Pep Guardiola may prove positive for the English International going forward.

One of the wonder kids Leroy Sane, this guy has set the bars extremely high with his performance last season that he have to work at the double rate to reach that bar. He has been consistent and made his presence felt at big games. He along with Sterling on the wings means lots of runs around that penalty area but we have to look how Pep makes his team play after spending high on Wing Backs.

Once a Chelsea outcast now one of the main player at Manchester City Kevin De Bruyne, this guy has pace, superb passes, class shoots, Deadly from Set Pieces, I Don’t Know how to describe this guy. He is perfect in every way possible. Kevin’s movement without the ball is so crucial and that when he gets the ball you can just hope the ball gets into the net in some moments. He is a perfect Number Ten for Aguero and Gabriel. 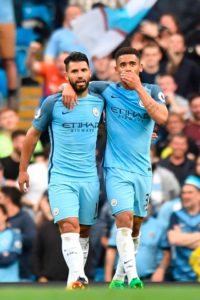 Now we are on to our Strikers, Gabriel Jesus has looked promising since making his City debut in January and Pep has many times indicated that ‘He has all it takes to become the best player in the world’ and we all have seen those capabilities in no time. He is still young and has a lot to learn, Only way is up for him and he is the best person to replace Aguero in the near future.

Sergio Aguero has been the Man for City since he signed from Atletico, he is the Hero of the crowd and the Person of the team. Every time he steps in Fans go frenzy as he certainly scores. Despite being benched and Gabriel given a go many times last season if we want to win champions league, he have to be there for the team, scoring those goals and giving those sweats to defenders. 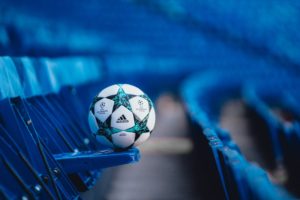 According to City’s Boss, in group stage of Champions League his side will be going up against one of the top three footballing teams.

“When the third pot is Napoli – the best team in the pot – it is complicated,” he said.“In the Champions League we can expect Pots 1 and 2 will be strong but today all the teams are strong. We’re going to face the team who played the best football in Italy – I’m not talking about winning. I like to watch the teams who want to play.

“In Italy, where the culture is defensive in the box, they play 40m in front a bit like Arrigo Sacchi did once. With the ball they are fantastic. For me, they are one of the three best teams right now in Europe playing football. Of course the other [teams] we are going to see.

“The Champions League is always complicated. Everyone can beat you home and away. Hopefully we can arrive in good shape.”

Manchester City have announced their UEFA Champions League squad comprising of Twenty-One players from A. Though, Pep Guardiola will even be able to call players born after 1 January 1996 who have playrd for consecutive two year for the Blue’s of Manchester who were included in UEFA’s List B.