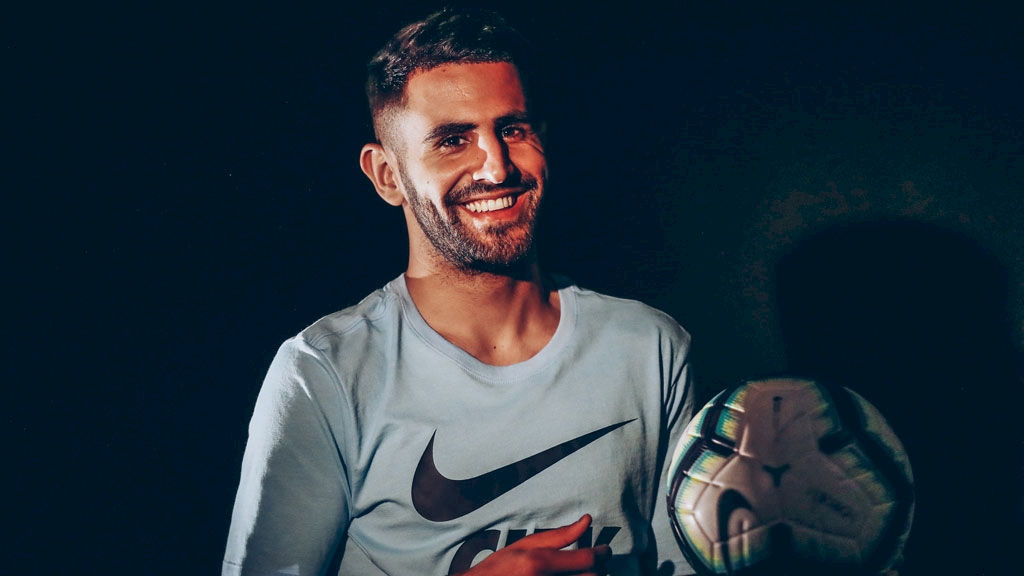 He is creative winger who prefers to feature on the right and he is one of the best for what he does. Mahrez can dribble, pass, shoot, track back and most importantly make as well as score goals. He is someone who won’t really disappoint.

Mahrez is full of tricks and you never know what coming next when he possess the ball.

ARSENE WENGER: “Mahrez is dominating the Premier League. Maybe Vardy is a bigger goal-scoring threat, whereas Mahrez is the bigger threat creating chances. That’s why they are playing so well…”

KASPER SCHMEICHEL: “He’s an extraordinary player. But he can also be frustrating at times when we have to dish fines out for coming late! But, we accept that because on the pitch he’s just extraordinary.”

CLAUDIO RANIERI: “Riyad made two fantastic performances, in Bruges and here, and I’m very pleased when he plays in this tactical way because he was very clever, when to attack, defend and play in between the lines.”

It was legend ‘Zinedine Zidane’ who motivated Riyad Mahrez to give football a start.

Mahrez took his first step with AAS Sarcelles in 2004 based in his hometown Sarcelles, France.

Mahrez’s father passed away due to heart attack when he was just fifteen. He refers this black event as “kickstart” of his career.

After spending four season, 19-year-old Mahrez penned a deal with Quimper FC. At his spell at seventh tier French League, he used to play with Mathias Pogba (brother of Paul Pogba). With his exceptional performances, PSG and Marseille were keen to land Algerian star. But he turned down both the offers and moved to second-tier Le Harve in 2010.

He initially played for their reserve team, before going on to play 67 times for the first team, scoring 10 goals. With time he transformed into one of the most consistent right winger in French football.

Leicester’s scout Steve Walsh was initially scouting teammate Ryan Mendes, but was impressed by Riyad Mahrez. At that time Leicester City was in Championship League.

Upon hearing the name ‘Leicester’ Mahrez thought it to be rugby club. His exceptional performances earned him a move to the King Power Stadium on January 11, 2014.

Mahrez helped Leicester to win Championship 2013/14 which gave Foxes a promotion to Premier League for a first time in ten years. He made his Premier League debut on 16 August 2014. He ended 2014/15 season for Leicester with four goals and three assist from 30 appearances in his first year in Premier league.

Mahrez scored twice in the opening game of 2015/16 season. After netting four goals in the opening four matches of the season he was nominated for the Premier League player of the month.

He formed a strong partnership with Jaime Vardy with the duo being recognized around the world.

His hat-trick against against Swansea in 3-0 win on 5 December 2015 helped his side to go to the top of Premier League table.

In January 2016, Mahrez transfer value was said to increased from £4.5 million to £30.1 million. He showed his qualities and suddenly everyone were talking about him.

Things reached the burning point when the barbershop in Sarcelles that he frequented from his childhood became a destination for fans desiring the same haircut.

Four of Leicester City stars have been named in the PFA Team of the Year in April 2016. Riyad Mahrez was one of four Leicester’s player and later that month he won the PFA Players’ Player of the Year award (first African to earn the accolade).

His unconventional path to stardom came when he won the 2015/16 Premier League title for the club – The first Algerian to win a Premier League medal.

It will certainly go into the books as one of the greatest stories of 21st Century.

Heading into new season 2016/17, he penned a new four-year contract with the club. Mahrez was up for the Ballon d’Or in October 2016, finishing seventh.

At the end of the season Mahrez publicly admitted his wishes to play for a bigger club, with several European giants interested in securing his signatures. On 31 August 2017, the last day of the transfer window the Algerian Football federation allowed him to leave the national team and travel quickly to Europe in order to complete his transfer to an interested club but transfer did not materialise.