Manchester City full-back Benjamin Mendy has tagged team mate Raheem Sterling as one of the toughest opponent he has faced.

Mendy and Sterling have faced each other off on numerous occasions with both regular participants in national squad of various age groups growing up.

Benjamin Mendy at the moment is sidelined with a ruptured anterior crucial ligament in his right knee.

“Raheem has been annoying me since we were kids!” he said.

“We started to play against each other when we were 16 in France v England games,” he said.

“We met again at 17 during the European Championship. We played again against each other at U20 and U21 level and now at senior level.

“We know each other very, very well.” 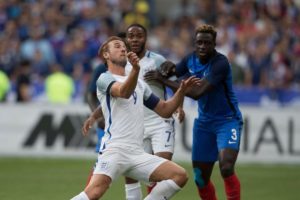 The 23-year-old Benjamin Mendy convinced Man City Boss Guardiola to bring him to Manchester in July this season. And he admits one of the benefits  of his move to Manchester is he doesn’t have to face Sterling anymore!

“He told me the same when I arrived. It’s the first thing he told me!”

Mendy says his French compatriot Ousmane Dembele is another player he admires.

Benjamin Mendy believes Ousmane  Dembele who joined Barcelona from Borussia Dortmund this summer
is one of the game’s top talents.

And he also cites Juventus’ brilliant Argentine forward Paulo Dybala as a player he rates highly.

“Ousmane Dembélé. I never played against him but it must be difficult.

“Sterling and Dembélé are two players I know are tough to play against.