On Thursday, Kelechi Iheanacho was signed by Premier League side Leicester City for  £25 million on a five- year contract.

The 20-year-old made his debut for Manchester City’s side against Watford in August 2015. His first campaign ended up with an impressive 14 goals in all competitions, despite many of his appearances coming from the bench. 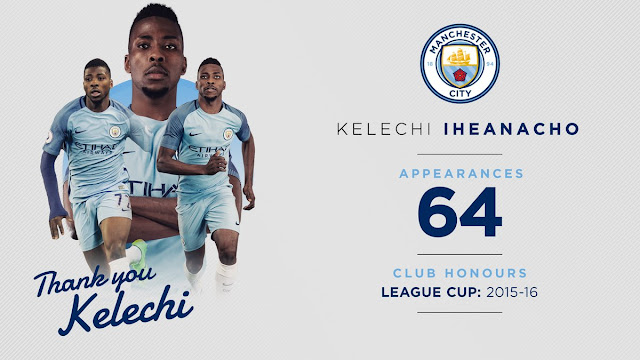 Iheanacho has made 64 appearances for City and put his name 21 times in scorecard, helping the club to League Cup success in 2016.

Iheanacho  was also a much-loved member of the City dressing room and a firm favorite with the fans, who appreciated his work-rate and ability inside the box.

The Nigerian leaves clubs with the best-goals-to-minute ratio in Premier League history for any player scoring 10 or more goals.

Iheanacho, who will wear No 8 at Leicester City, said: “It feels good and I’m happy to be part of this team.

“I know the ambition of the team and speaking with the manager, he let me know what I need to do – to help the team achieve what they want. I was convinced and I’m happy to be here.

“I was happy speaking with the manager, knowing what the team wants. It gives me more confidence that I will fit in this team and hopefully I’ll achieve a lot.”

Upon welcoming the new striker, Leicester City boss Craig Shakespeare said: “It’s a great signing for us. Kelechi is an enormously talented player that has shown a huge amount of promise at every level in which he’s played.

“We’ve tracked his progress for some time, so we know how much quality he’ll bring to the squad. He’s young, he’s hungry, he’s ready for the next stage of his development and I’m delighted that will be with Leicester City.”