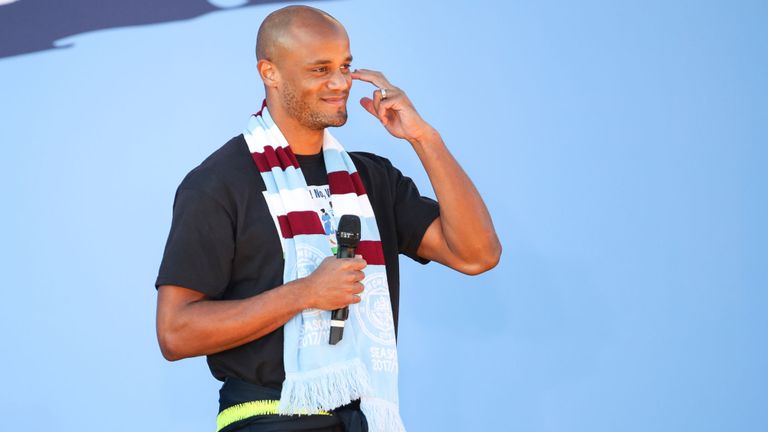 Vincent Kompany has hardly been a regular for the past couple of campaigns for Pep’s Manchester City side, but his contribution off the field will be desperately missed this season.

Even when Kompany was in the side, his presence showed as to why he was so successful in the famous sky blue shirt.

His absolute screamer against Leicester last season to clinch all three points in the final few games of the season was another example of his significance on the field, as many regarded that moment as the one that secured Man City their second consecutive title.

He has now decided to move on in his career, taking the role as player/coach at his boyhood club, Anderlecht, where it all began for the centre back.

The Belgian’s reputation has already helped bring in some big names, as Samir Nasri, former Arsenal, Man City and West Ham midfielder, has reunited with Kompany.

Kompany has also been able to persuade Kemar Roofe to join from Leeds United, who are looking to go one better and reach the Premier League after losing the play-offs last season.

Roofe was vital in Leeds’ promotion push, scoring 15 goals in his third season in a white jersey.

The latest Championship betting odds suggest Leeds are the favourites to go on and win the league this campaign, as Marco Bielsa has opted to stay for a second spell at the Yorkshire side. Bielsa’s side won 3-1 against Bristol City on the opening day of the season, proving bookies were right to price them as early favourites to return to the Premier League.

Kompany is a winner, a leader and very much someone you need in a dressing room to succeed. Man City’s loss is very much Anderlecht’s gain.

Man City have also failed to replace their former captain, with many suggesting City may prove vulnerable at the back, after John Stones and Otamendi started the Charity Shield match against Liverpool.

Pep will know this. He clearly wanted to bring in Harry Maguire from Leicester City, but their price tag of £85 million was too much – even for City – who has since signed for their arch rivals in Manchester United.

Rumours suggested Man City were willing to pay in the region of £70 million for the centre back, alongside offering Mangala. But Leicester were not interested in City’s centre back, and were keen to hold out for £80 million.

Man City will be tested this season, there’s no doubt about that. If they can replicate another domestic clean sweep, it will surely be regarded as one of the best triumphs in English football history – especially without such a key figure in their dressing room. Klopp’s Liverpool will no doubt push them all the way once more.

Kompany has been one of the best centre backs to grace the Premier League and he will leave a void behind. But Man City showed with their Charity Shield win over Liverpool on penalties that there is life after the big Belgian, and they will continue to dominate English football for years to come.