UEFA NATIONS LEAGUE has favoured the hosts. Portugal beat Netherlands last night to clinch their second European silverware. The European Champions for some sort have found a way of winning important trophies, led obviously by their talisman.

Besides an exemplary game of football, what I also noticed was the chat between Cristiano Ronaldo and Matthijs De Ligt. The striker was seen to be passing a few comments to the youngster which were to be later revealed by Ligt.

From the time Kompany has been gone, we’ve been seeing De Ligt as his potential replacement, which I fear now. The Dutch international was already our neighbour’s favourite but after yesterday it seems that Turin can also be his likely destination. That being said, City are out of the picture.

After the game, De Ligt agreed to the fact that Ronaldo offered him an entry to Juventus.

‘But I didn’t say anything.’

‘Just after the game you just feel bad that you’ve lost, that’s all you’re thinking about.’ 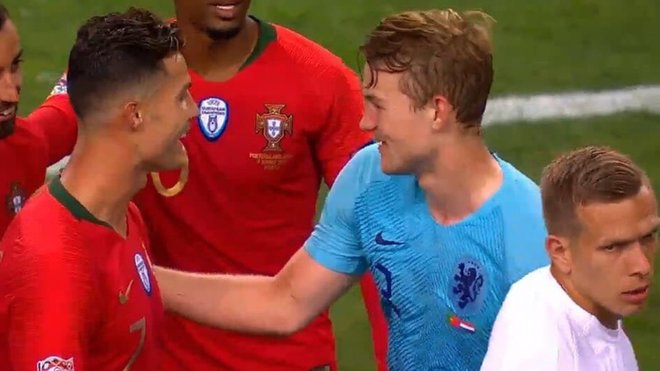 De Ligt, however, added that he would think upon his future with Manchester United or Juventus, giving it a sure and short end to City’s hopes.

‘I will go on vacation now,’ he told TV Univision following the Netherlands’ defeat.’

‘I am going to think about what’s best for me and then I will decide.’

‘I think it’s important for a young player to play, that’s the only thing I know.’

The talent, skill set and discipline of De Ligt is evident and to miss a young starlet with plenty of football to come is a big miss for Manchester City. Now, the Blues of Manchester would have to start their home work, find out a potential Kompany replacement in which I see Harry Maguire the most possible replacement.

String to your seats, guys! We surely have a roller coaster transfer window coming up the ranks with a lots of ups-and-downs, speculations and rumours.