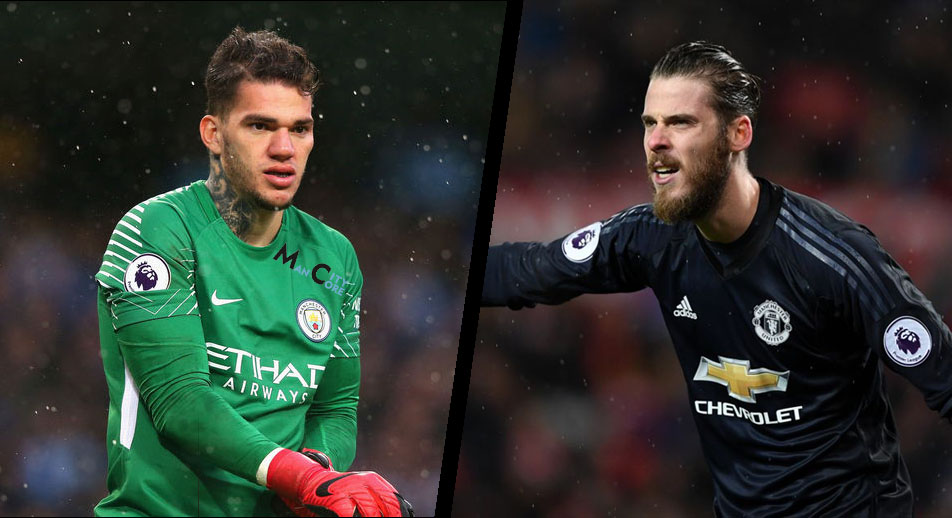 The arch rivalry between the two sides from Manchester is one of the most promising modern day fixture and it will have involvement of two of the modern day keepers who have made a name for themselves – That Name will be tested this Sunday at Etihad when Manchester United visit Pep Guardiola’s Manchester City at 16:30 BST.

Manchester United’s David De Gea is the best goalkeeper in FIFA but is he in real? – Well his run of performances since World Cup just proves the contradictory. He has a chance, to live up to the name he has made and probably prove himself on the big stage once again.

While Ederson has given every opponent that he has faced, hard time in slotting the ball past him. With numerous clean sheets this season, United’s wobbly forwards must break the shackles.

The Brazilian National has made himself Manchester City’s most proficient and dependable keeper between the sticks. With his punches and attack building abilities, Ederson is an attacking threat from the last line of defence.

Is it City’s defence or Ederson maintaining clean sheets?

A defence seldom tested, a defence more often found in opponents half, a defence not made to falter by opponents, City’s big name on back  have helped their strikers score more.

It may be Pep’s tactics of creating chances from the flanks and with quality of supersonic midfielders, City’s defence hold on the possession with their consistent tackles.

And as far as Ederson is concerned, the Brazilian gives in his all whenever the anchor of responsibility falls onto him.

Be it his thumping punches or saves from spot-kick, Ederson has been sole person responsible for keeping his clean sheets, which come with final touch of brilliance and decline any chance of ball getting past him.

An extraordinary goalkeeper with calm approach, desire to improve furthermore and stability in good and bad makes him Pep’s go to guy.

To come against United’s attack that seldom creates a threat but when they do it is hard to stop. Be it Martial’s curling touches into the nets or Pogba’s swift strike off the box.

The consistent shot stopper will be shouldered a huge sack of responsibility to maintain a clean sheet.

Manchester United would have easily succumbed to their torrid defence if it was not for the Spanish international.

Following the steps of his idol Casillas, De Gea has made his presence felt with every drop of sand.

The sturdy gloves man will be against the most attacking & high-scoring team that need only an inch to sneak through opponents defence.

After a heavy win against Southampton where the table toppers whooped in 6 goals past net, City’s confidence is reaching peak as against their opponents, which is in dire straits.

Since the start of season, David De Gea had conceded 10 goals of 14 shots on target including those in World Cup. To forget those and come back on top was just a matter of time and with De Gea it came earlier.

David De Gea has highly been under performing as of now, though he does have significant amount of contribution for every point that United take. The bossy approach of De Gea will be must to cause an upset, one which is most unexpected by present United.

De Gea needs to get some confidence back and there is no better stage to do so than THE MANCHESTER DERBY.

Real trait of a champion is overcoming is worse times. Can horrendous stretches of fortnite for De Gea finally came to end?