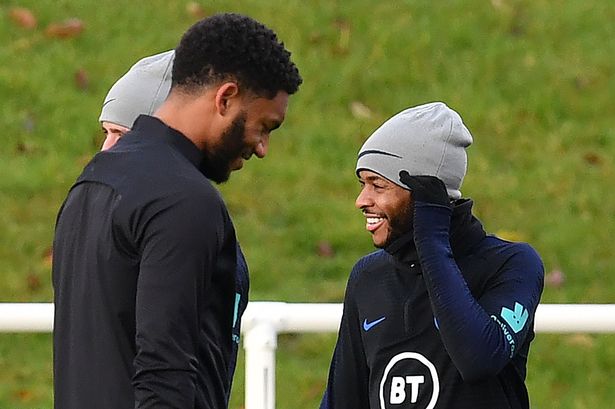 Manchester City playing Liverpool, well recent run of results have established the fixture as one of the most anticipated not only in England but also around the globe – probably much more anticipated than El Clasico as of now. And the brews left on City players were far more deep after their defeat to Liverpool just before the international break and that led to some heated moments in England camp.

The winger was booed the most by the Liverpool fans and was also a puppet to release frustration on by the Merseyside players. Two of his international teammates, Trent Alexander Arnold and Joel Gomez were seen harassing him on the field with Sterling ending up in a head-fight with the latter while being pushed out by the former. Sterling when met Gomez on the training field of England could not control his emotion and went down in a fight with the defender. City’s uprising winger is understood to have attempted to grab Joe by hid he neck, attempting to ask the Liverpool man, ‘you still the big man?’.

England players initially though Raheem was joking before realising that things are rather serious and an intervention was needed indeed.

Joe Gomez was left ‘deeply shocked’ following the bust-up, and according to the Times, Joe did not retaliate following the confrontation. The reports say Southgate was quick to react sending Sterling home but following a meeting with senior players, he was told to return for training.

Raheem was seen training at the St.Geroge’s Park on Tuesday morning – though he won’t be considered for selection for England’s Euro 2020 qualifier against Montenegro coming Thursday. Yet, he can feature for the Three Lions on Sunday against Kosovo.

Meanwhile Gomez was seen training with a scratch under his right eye on Tuesday.