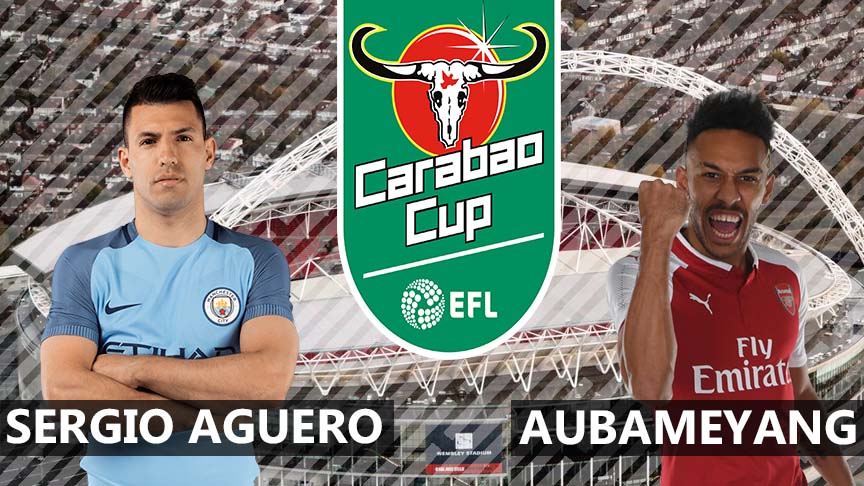 City’s victory over Bristol City 5-3 on aggregate while The Gunners beat Chelsea 2-1 on aggregate in the semi takes both of the Premier League giants into EFL cup final.

This year’s final game between Manchester City and Arsenal will be held at Wembley Stadium, London on Sunday 25 February with kick-off has been confirmed for 16:30 GMT (11:30 ET).

Mancitycore will today analyse another Key Battle that supporters will have to look out for this Carabao Cup final. Mancitycore looks at ‘where’ both of the deadly strikers stand and gives it up to you, to decide who comes out on the top.

The City’s striker Aguero has been the main man for years. The Argentine international is one of the most lethal striker in the world and his pace accompanied by Perfect shoots and some physicality makes him some kind of dangerous devil in front of the goal.

He has the best-goal-per-minute statistic, 85.14 with most hat-tricks this season, 3.

Manchester City top scorer Aguero has taken 88 shots this Premier league season netting an impressive 21 goals in just 22 appearances. On the other hand, he has assisted in five goals of Manchester City so far and created nine big chances with 44% shooting accuracy this season.

He is always been there at the top end of Golden Boot list and it’s important that he keeps on giving good performances.

Arsenal completed the signing of Pierre-Emerick Aubameyang in a club record deal this January transfer window is known for his pace will surely cause many problems for defenders. The Gabon international is unquestionably among the top strikers.

Aubameyang opened his goal account for Arsenal against Everton.

Arsenal can take Auba’s pace and hit off the mark on counter attacks consistently, particularly with the players Arsenal have going forward. Auba’s movement with ball misleads the defender leading directly to creativity around opposition penalty area.

The power house of Manchester City as well as Arsenal will battle against each other as heart-beats of entire globe hopes for the goals by their favorite among-st the two.