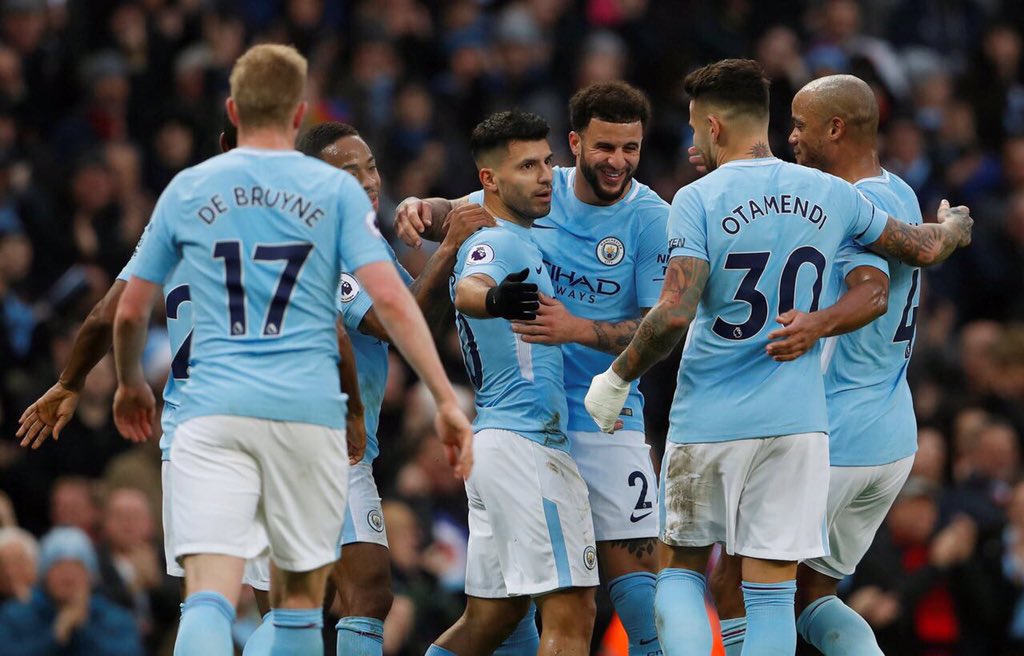 The Citizens celebrated their 17th consecutive win on the road to make their stay on top cemented at the end of the year. A comfortable victory over low lying Bournemouth means City extend the gap even more and dream for the liftation of the desired prize in May doubles up on cast of Christmas.

Citizens headed by Argentinian superstar Sergio Aguero at the front reflected another sheer piece of brilliance at the Etihad. The top goalscorer in the history of the club, Aguero was rewarded with the man of the match award because of his comprehensive brace along with an assist to define City’s victory.

David Silva also showed his class in returning to the squad after tackling serious family issues which made him a doubt prior to this fixture. The Spaniard put aside his family matters and was eligible every time to torment Bournemouth’s defense.

But City wasn’t at their best mood from the start. However, they took a quick lead inside 20 minutes into the game when the away side fragile defense allowed Fernandinho to loop a pass inside the box which was met exclusively by Aguero whose diving header as quick as a flash rippled the net beyond the reach of Begovic. 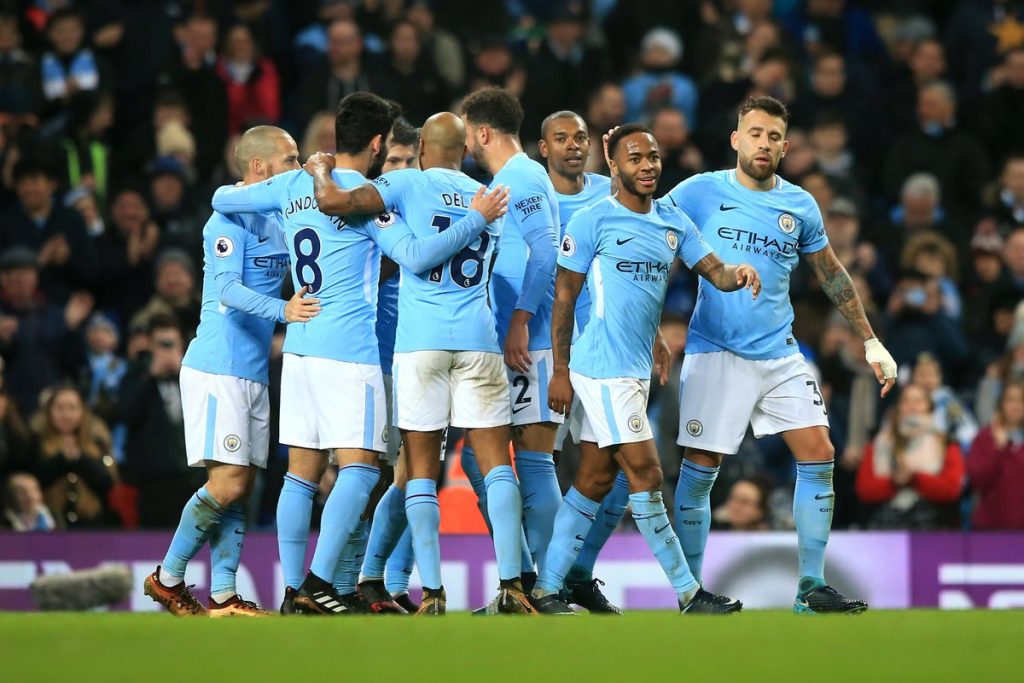 In the second half, the Citizens resembled their dominance. 53rd minute in, a silky move caused Raheem Sterling smash the second of the evening. The move was started by David Silva. From his Aguero made a cunning flick towards Sterling who didn’t think twice to slot past the Bosnian Begovic.

Aguero then earned his second as the match move towards its end. Bernardo Silva, the Portuguese who scored his first goal for City at Leicester in midweek in the Carabao cup, helped in an assist for the Argentine to nod in.

Danilo completed the scoring at the death to register his first of the club after a rapid counter initiated by Aguero opened up space for him. The ultimate pass came from Raheem Sterling.

Even though City marched on to claim three points, there was certain aspects where minimum improvement is required. Hopefully the pace the team is bringing and with a great teacher in Guardiola in the dressing room, the blue of Manchester are sensing positivity.

Now, we look at the performance of the total eleven through player’s rating with whom City showcased another gallant deed.

1. Ederson (7/10): The goalkeeping art which he showed tonight was not bad but it seems he need to make up himself strong by mind. Coming under pressure from Jordan Ibe’s pressing, the former Benfica keeper looked sloppy in communicating with his defense.

2. Kyle Walker (6/10): Never rated earlier for defending, the truth of the matter imaged in his play. But was very versatile in moving forward and guiding the attack by moving up balls continuously up-field. Defensively, he needs to increase his work rate and try not to exploit himself.

3. Nicolas Otamendi (8/10): Probable the best man on the back line. Otamendi is rejuvenated this season earning the full belief from his Catalan boss and there was no lapse on his end to decide the result of the game.

4. Vincent Kompany (7/10): There was a cloud of uncertainty over him before the kickoff but he ticked himself in the list of the starting eleven. With all his experience and leadership, the Belgian contributed a lot from the back.

5. Fabian Delph (7/10): Scintillating with his runs on the left flank, Delph was never to be underestimated in the game. Though he didn’t had to work a lot in helping the attack but helped in pass distribution and cheeky one twos.

6. Fernandinho (8/10): Anchor in the midfielder region. The Brazilian international was well worth a watch with an upgradation version he installed in himself. By signing a contract extension, he proved his thoughts of serving City even longer. His defense cracking long ball allowed the brilliant opener by Aguero. Not only that, the midfielder was hard to stop with his strides and pass distribution.

7. David Silva (8/10): It is always difficult to concentrate on the pitch when you have other issues boxing in your mind. But that is nothing if you are David Silva. The Spaniard was involved in two of the four goals that was scored in his return to the starting eleven.

8. Kevin De Bruyne (7/10): As usual fantastic to watch, much of his work pressure was shared by the team today. The Belgian forbided any distortion in the build up by keeping his consistency. His quick combination play with Silva and Aguero crushed hopes of visitors.

9. Leroy Sane (5/10): Lost his discipline when ge failed to escape Adam Smith’s marking. The young German had a sort of a torrid game but always was a threat to Eddie Howe’s boys.

10. Raheem Sterling (8/10): There was no stopping of this Englishmen who is a performer on high state. Scoring and assisting are not only gifts of praising for him but also the destructive partnership he created with Sergio Aguero.

11. Sergio Aguero (9/10): After all we bring out the best from the bunch for tonight’s game. Aguero scored a brace and made one happen in an energetic display which also permitted the grappler to score 100th for City this campaign. Lying as a second choice after Gabriel Jesus for most of the time, Aguero inflated a draconic inflare to suggest his role. 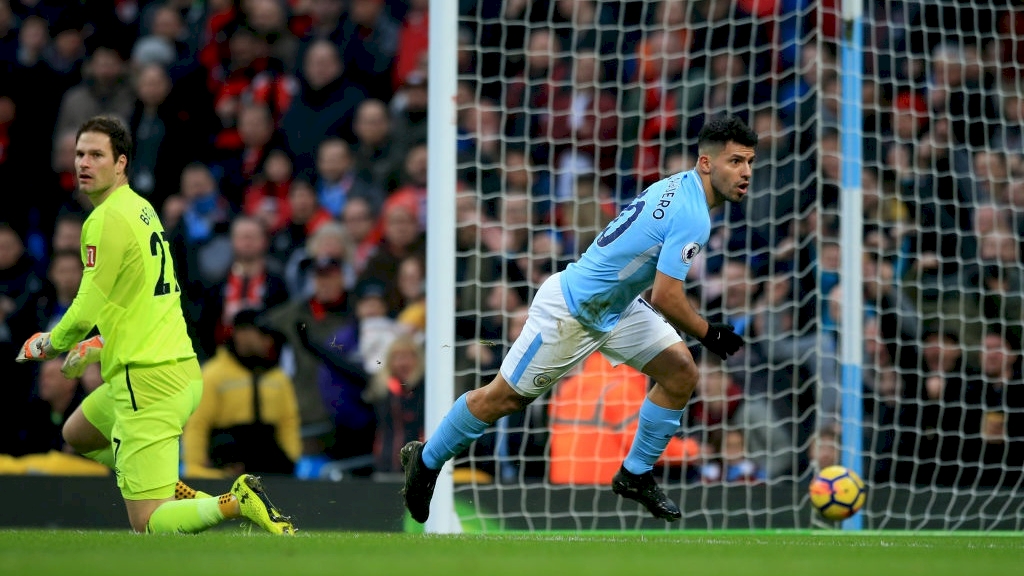 1. Bernando Silva (8/10): The purchase from Monaco was intriguing to watch. From his excellent cross City eased up a lot of pressure through Sergio Aguero’s moment of brilliance following it. The Portuguese is sure to stand such performance in the future.

2. Danilo (8/10): As a replacer of Fabian Delph in this game, the left back scored his first goal for his new club. The ex Real Madrid full back charged up the attack at the dying moments so that opposition don’t capitalize from lazy passes.

Pep Guardiola: “Always you have doubts after a lot of games in a row if mentally, you are ready to do it again and again. That impressed me the most about the guys. That they were ready.

“It was similar to Southampton and Huddersfield games, West Ham too. They defended 5-4-1. Striker Wilson with Fernandinho. There was hardly any space. There was no space between the lines.

“We made a good first goal and the second one helped us a lot. They changed the system to 4-4-2, we found tempo and space. We scored four beautiful goals.”

Pep on Raheem Sterling: “With and without the ball, he is so aggressive and so intense. I like the most how clear he is becoming like a football player. He knows when he has to dribble and when he has to pass. Before, he was only dribbling and that was a mistake.

“He is enjoying scoring goals. Before, i think he was a bit scared. He’s a young player and important player for the national team. The most difficult thing with footballers at that age is to maintain that level- 7s and 8s.”

Sergio Aguero: “I am very happy to reach 101 goals and hope to keep scoring in that way.

“This side are always trying to find the striker – I only have to score the goal.”