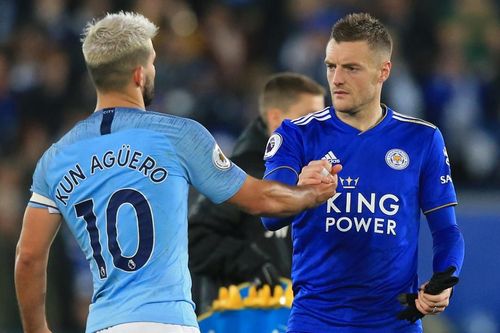 As the end of Premier League gathers pace, the excitement intensifies. Two teams that have out stunned every other this season are still fighting for the top of table finish. Liverpool and Manchester can do nothing but play for the another to lose which considering the form they are in is not possible.

Manchester City, however, face a tough task in Leicester City who are coming afresh with a commanding 3-0 win over Arsenal courtesy a brace from their godly striker, Jamie Vardy. If Vardy is successful in doing a 2016, it will be difficult for the hosts to command lead.

With only two games left to end the journey and reach the light at end of tunnel, City are confident of scoring 6 points in remaining 2 games. The story has been flavoring City so far and we would not want a climax to come.

Manchester City, yet again face the clouds of discomfort with their heart of midfield, Fernandinho being a doubt. Adding to their fury is the absence of Kevin De Bruyne which I feel has been replaced well by Bernardo Silva.

Giver Leroy Sane’s versatility, he is a sure start alongside in forms, Sterling and Aguero who may be accompanied by Bernardo, Gundogan and David in the midfield.

The defence of City will be an encore of last games with the experienced Vincent Kompany handling the helm.

Jamie Vardy is back in his earthquake-ish form which leaves Leicester as no longer a pushover. They are a team to beat. Leicester only have an injury to Amartey with all other players ready to make City mourn.

Manchester City are on the run to defend their Premier League title with Liverpool tailing their heads, although Leicester City is a tricky tie and can prove essential in the race for table top this season. This is despite the fact that nowadays people prefer betting outright on Manchester City with consistency in which Pep Guardiola & Co. turn up every Saturdays. Well, season is on course to an end and here are your final chances to get some odds outta Premier League. That, of course, means tipsters and sites such as Freebets have to keep on top of ever-changing odds. For examples of that click here to see just how frequently odds differ and change from market to market.

Its essential for the Blues from Mancheser to get three points every weekend till the season concludes to make sure they kiss the title. Any slip-ups could just mean handing it over to arch-rivals Liverpool. What are the chances of this happening? Fans would be happy to learn that the bookies are giving decent odds to bet on Man City to be the big winner. There are available bets such as 4/6 with Betbright, that can suggest a nice prize with relitively low risk.

Manchester City have always seen their players unravel the better of every opponent that they face in recent years. Same has been the case with Leicester in last 6 games, City winning 5 out of those before gifting 1.

In total also, City holds the better of Leicester with 58 wins under their belt as compared to Leicester’s 30. City, surely are the happier side.