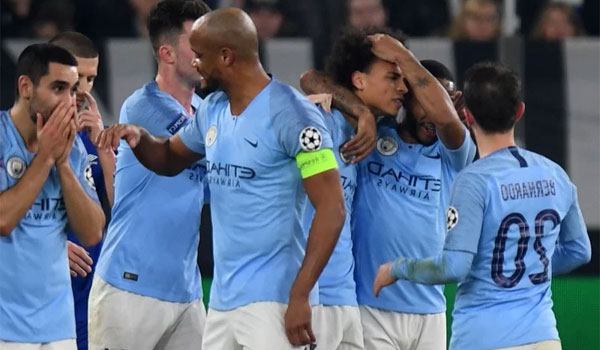 Manchester City will host Schalke in the second leg of round-of-16. The welcomers head on the tie with a 3 away goal advantage courtesy late stunners from Leroy Sane and Raheem Sterling.

Though City is hot favourite to win the Cup, we can expect a setback as it happened in previous ties where Ajax stunned Real Madrid and Manchester United bossed PSG. The least Schalke would require is a 2-0 win to register themselves into the quarter-finals of Champions League.

City, however, would not want to give away on their dream to Quadruple glory where Schalke on the other hand will be buoyed up to sadden a defensively hurt Manchester City.

The starting XI of both the teams will play a major role in paving the way for another half. Both the managers will try to adapt a best possible XI with given materials.

Meanwhile, Guardiola is expected to welcome his English man John Stones back in the defensive line after his recovery from injury.

Apart from the permanent absentees of Fernandinho and Benjamin Mendy, Guardiola will have to do without his ace midfielder Kevin De Bruyne.

Nicolas Otamendi will be serving his suspension owing to a red card in the first-leg at Germany.

As for the visitors, they will miss the service of Alessandro Schopf, Omar Mascarell and Daniel Caligiuri who all have been ruled out sustaining injuries. The second-preferred goalkeeper Fahrmann may be given a go in between the woodwork after his wonderous performances in Bundesliga.

How can one forget the reverse fixture which had plenty of drama, late goals, breathtaking tackles, red card and in all a victory for City.

Moreover, Schalke have never won over City except in the semi-finals of Summers Cup of 1970. Whereas, City have always conceded a goal against this German opponent barring a game in 2008.