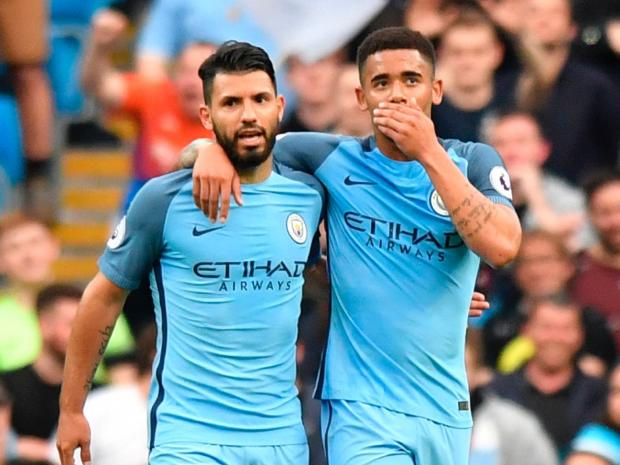 Manchester City has one of the most potential strikers in Premier League this season,with Gabriel Jesus and Sergio Aguero – Two top quality strikers will fight for one position.With The Brazilian  striker hoping that Competition with the Argentine will help The Blues of Manchester to achieve greatness this season.

Gabriel made an immediate impact in the Premier League after netting three in his first couple of premier league games,and pushing Aguero on the bench until the latter got his chance due to injury to Gabriel. But With the Return of Gabriel marked that Aguero and Gabriel playing together,putting the defenders on their tough job.

And This competition will help bring the best out of each other.

“Sergio Aguero is a high-quality player,”Gabriel told The Daily Mail on Friday. “I’m a big fan of his, both of his football and his humility.

“I’m a big fan of his, both of his football and his humility.But ultimately it’s the manager’s decision. If he wants us to play together we can, as we have already shown. But if he wants me to play up front alone, it’s his decision.I just hope that any competition between us benefits the team, that it inspires both of us to score plenty of goals for City and leads to the club winning lots of matches and trophies.”

Jesus assisted four and netted seven in his 10 league games last season,however his mother is not happy with his frequent offside running.

“I scored a goal in that game against Venezuela and it was the first time that I celebrated with a gesture for my mother. My friends had helped me to come up with it as a tribute to her,” he explained.

“She’s a fan but she knows a lot about the game. Above all, the offside rule. When I’m caught offside, she’s always sending me messages.I like to think I understand the offside rule well enough. Hopefully she doesn’t understand it better than me.”