Arijanet Muric was shown the ‘red’ carpet in Montenegro’s under-21 defeat in hands of Slovenia.

Manchester City Academy goalkeeper Ari Muric will have to serve long-term international ban after headbutting an opponent right in front of official.

Slovenia striker Martin Kramaric imploring the match official to take some action on Ari Muric for a challenge in a goal box on Zan Zuzek and gave the ‘keeper a light shove in the back. 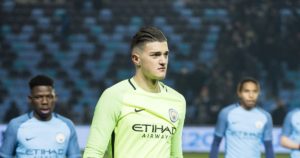 But shot stopper Muric responded and headbutted aggressively into Kramaric’s face right in front of referee.

After being shown the ‘red’ carpet, the 18-year-old lob the ball in the direction of Zuzek, who was still lying on the ground.

The Swiss born featured in Champions League with first team squad in a match against  Feyenoord last month.