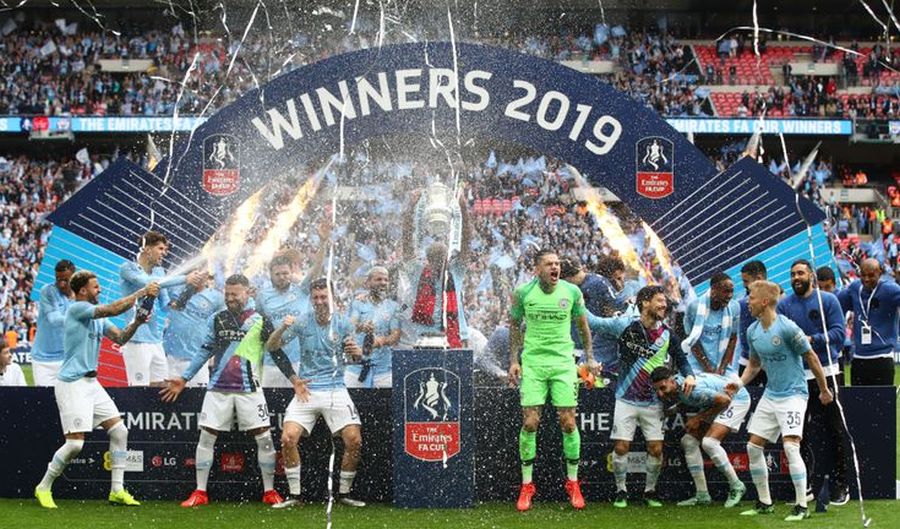 They are remorseless, relentless and invincible!

The toil for victory, later they do it convincingly. They practice to win, later they thrash their opponents. The first Premier League team to have a clean sweep of domestic treble that too handsomely, are now announcing their dominance. City’s historic FA Cup victory in the finals against Watford was a testimony of their record tally piling up.

The firmament of doubt that was hovering around Manchester City’s hallmark of greatness ceased with a brilliant 6-0 win in an all important final against Watford. I still can’t call them the best team at present but surely there is nothing that can disguise their achievement in last 2 years.

Their achievement in itself speak eloquently on their behalf which their brushing defeat to Watford only intensified. The domestic treble comprising FA Cup, Carabao Cup and Premier League had never been won before; neither by the United squad of 98/99 or the Invincible of Arsenal.

The seamless form of footballing torture was brutally streamlined by Pep Guardiola giving these 8 months of English football an enchanting spectacle. The greatest day in English football was a rather ruthless one for Watford and millions of City’s antagonist.

Pep Guardiola’s addiction of winning accompanied by hot-blooded tactics has devised a new level of English football; one that has raised the bar enough to make Premier League sides compete against top clubs of Europe, namely: Juventus, Barcelona and Real Madrid.

Not next year but the history books had to be re-written again; the story of this season so far. City scans record then breaks them only to further increase the gap to make it unachievable.