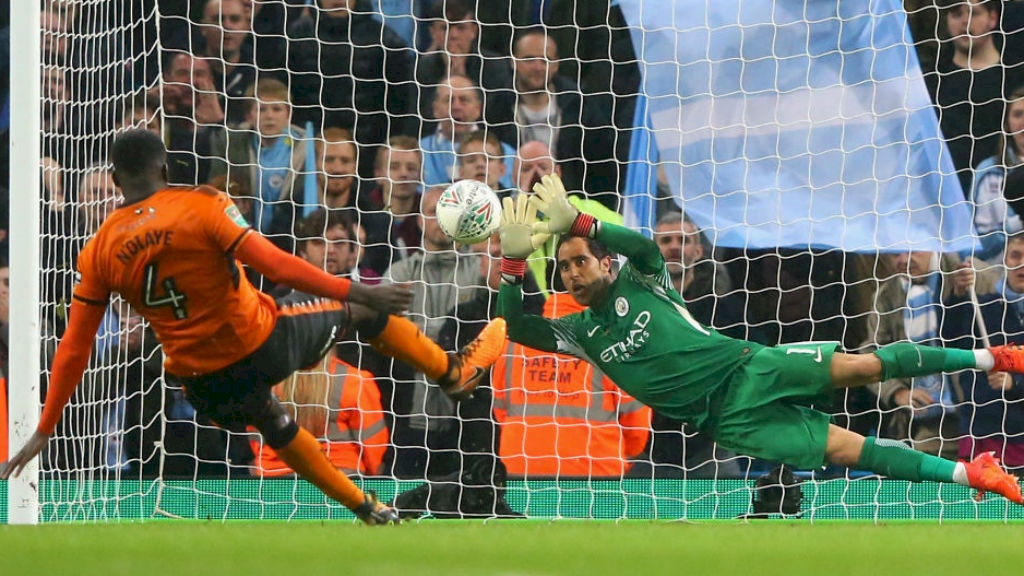 The win over Wolves secured Man City’s place in the Carabao Cup quarter-finals and been drawn away at Leicester.

The penalty shoot out victory sets a new Club record of 12-consecutive wins.

Claudio Bravo making his third appearances, emerged as a hero by saving three one-on-ones in normal time and then two more in the shoot-out.

Here’s what some his side and fans said on Bravo’s brilliant performance:

Guardiola said: “It was so, so tight – we had chances in the first half, then in the second half we conceded some counter-attacks – they are so fast in counter-attacks.

“Today Claudio gave us the chance to go through, I’m so happy for him, the way he trains, he made a good performance in the game and in the penalties.

“Now we understand how difficult things are. The competition is so complicated, it can take you out of your normal rhythm.”

“Last season was not easy for Claudio, but he is a goalkeeper of a high level, it’s not possible to play with Barca, Chile (without this)… he deserved that performance.”

Manchester Evening News Brennan writes: “Claudio Bravo came up with his Willy Caballero moment as Manchester City squeezed into the quarter-finals of the Carabao Cup.”

“Caballero produced his heroics in the 2016 final against Liverpool, to carve his own niche in the club’s history, but Bravo was already man of the match as the Blues found a couple of strongpoints, and had their weaknesses exposed by the Championship table toppers.”

Yaya Toure who scored second penalty says after match:  “Today he [Bravo] was the best player,” Toure said. “He helped us a lot. He made some important saves today and the penalties as well.

“He’s been the best and, for me, he was the man of the match.

“He’s been under pressure with three one against ones with the striker. It’s not easy and he made a great contribution. He won the game for us.”

Ilkay Gundogan says: “I think he’s a penalty killer!” said the midfielder. “He showed it with Chile as well.

“And when you play 120 minutes, for a goalkeeper, it’s more about concentration, you have to always be 100 per cent concentrated.

“Especially the one-on-ones he saved, he was just brilliant.

“Last week in the training, we had a few penalties and he saved a lot of them.

“We are just happy to have him and today he was definitely man-of-the-match.”

Another important victory tonight !
Bravo for all the team and of course for our goalkeeper 👏🏿👊🏿#ComeOnCity #CarabaoCup pic.twitter.com/A84w71G7tK

This man had a STORMER tonight!! pic.twitter.com/Y2uneu9vHc

Claudio Bravo the hero. #mancity on to the next round.

Penalty Shoot-Out ? No problem, We have Claudio Bravo 1 !!

Oh my, that was mad!! My head hurts. Brilliant from Bravo 👏🏼