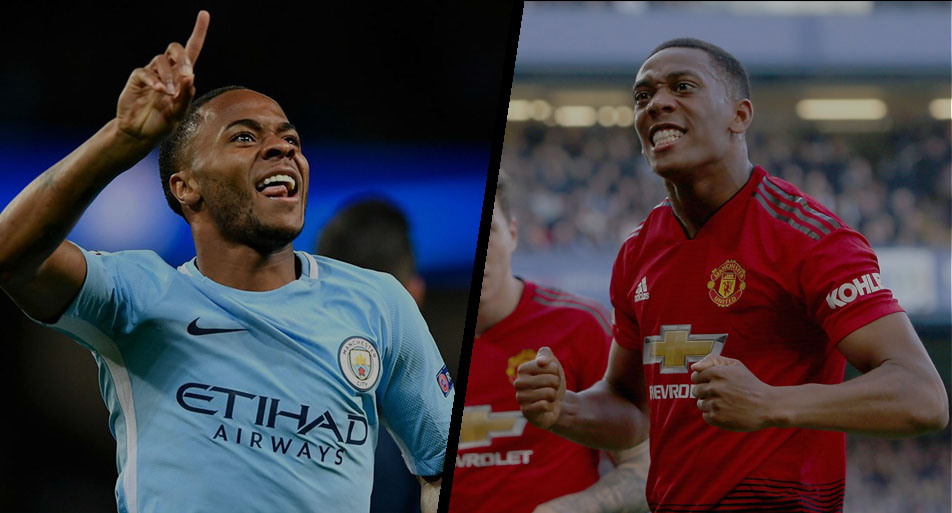 All eyes will be on Etihad Stadium on Sunday evening when the defending champions host arch-rivals Manchester United.

The color of Manchester will it be Blue or Red? Is Pep still sore about not lifting the trophy on matchday against United at home ground? Is he planning a payback? Is Jose Mourinho really going to try to beat Manchester City at their own game??

The answer to all these questions lies on two men that will be looking to have an impact on the match, and write their names into ‘Manchester Derby’ folklore, will be Raheem Sterling and Anthony Martial.

While one expertise in accuracy other is naturally capable of running fast. While one amazes the fans with his curling shoots into either corners other is into opponents half in a blink of an eye.

Two of the most influential characters in the Premier League will go shoulder to shoulder when Raheem Sterling and Anthony Martial looks eye to eye this Sunday. We will walk through their influence for their respective clubs.

The 23-year-old English professional footballer will surely be one of the key players for City in the match against United. Raheem Sterling offers flexibility in attack, with his ability he can play wide and cut inside to provide the ball to the forwards. He has been one of the most threatening winger of the Premier League over the past couple of seasons.

Termed by many as an inconsistent performer with adequate talent, Sterling has somehow managed to be in Pep’s starting eleven courtesy of his recent goal-scoring performances.

Raheem Sterling’s dribbling ability and pace are considered to be his strengths in the game. The low centre gravity helps him to turn in a small space and keep his body balance. His physical strength and technique are also worrying factors for any opponent to ponder. The physicality helps him to withstand the challenges of the opponent defenders and retain possession at the attacking third.

He has shown quality, mobility, mental as well as physical strength, intelligence, skills – this guy got everything in his books.

Anthony Martial is certainly capable of destroying the opponents on his day. The 22-year-old Frenchmen possesses the skill-set to mix it with the best though has found himself on the periphery at times under Mourinho after receiving heavy criticism last term. He is Mourinho’s go to man at the moment.

He rediscovered his goal-scoring touch recently, scoring five times in his last eight Premier League outings and is now full of confidence.

Martial is expected to retain his place on left flank and will go shoulder to shoulder with English beat Kyle Walker. This means Walker has to lie on his back foot to keep the Frenchman quiet on Sunday, and if the Frenchmen put in a performance anything like he has done lately, he will certainly make it a difficult afternoon for the English full-back.

Martial’s dribbling ability is certainly better than most of the players in the Premier League and has ability to cut inside from the wings to take a shot towards goal.

Who will cast a shadow on his compatriot performance? Will it be Martial’s twirl & curls or Sterling’s sterling efforts? A debate to be answered with time.